Fangirl : A Movie About Blinded Fan Love for MMFF 2020 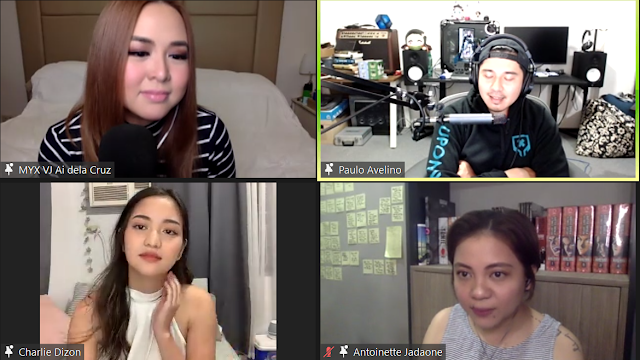 Tickets are now being sold for this particular film called Fangirl. It is starred by Paolo Avelino and Charlie Dizon under BlackSheep Productions, Project 8 and Globe Studios directed by Antoinette Jadaone. Tokyo International Film Festival gave so much acclaim with this very interesting piece and has been sent as an entry in festivals in other countries. This is a coming of age film where an ultimate fan girl got to spend one night with Paulo Avelino.

Tickets are being sold now via bit.ly/WatchFanGirl


Antoinette Jadaone says "I was a super movie fan before, when I was a kid my aunts used to go to santacruzans in araneta center just to see them there. When I got into film I was more into people behind the camera. My family loves films, my grandpa made a cinema in Pasig so I got to watch films for free. We used to watch all Filipino movies. I did film in UP Diliman. Fangirl is relatable, we've both been through things like these in one form or another. We idolize, it's like a romcom that is anti romcom. You will get to see a fantasy wherein you could spend one night with your idol, and this might go differently. The first leg of auditions, we already had someone for the role of Charlie. Out of 600, we got 7 of them do workshops with Paulo, we got look tests, we got costumes, but at the last minute there were contract problems already. We got to call one more leg of auditions and got Charlie there. When she got in, in about 2 to 3 days we already went shooting. When you see her, you already know it's her. She had lots of make up, she had lashes and all, you could see it was like a commercial for her. I had to see her bare and she went in, her walk was like a street gang member, she talked like someone from the streets too and deliberated about it a bit. She was also okay with kissing scenes and matured ones, so that's how it happened. I think one of the things this came from is how I have worked in films, it is interesting to see the culture of fans when we watch our idols on screen where the line is so faded. People expect what they portray in the movie is actually what they also do, but there is a difference when you have a camera or not. There are two concepts that I combined here, as a fan and as an actor. I think it goes with it as a cautionary tale, it happens. I think as film makers, we must tackle not just things that are talked about, but those that are not talked about. So scenes mostly will be things that people are afraid to tackle, done in tasted, done with Charlie's comfort and understanding the vision of it. I wrote this in 2016, I was way different then as a writer and director. I developed it in 2019 and the material changed a lot. It helped with that I got the advise of European writers because I got a more worldly view of fan culture rather than just a Filipino fan view. Things are going with technology, so fan culture changes with that. Actually writing this was different because it changes in the point of view of the fan. As a writer I resorted into method writing, I didn't have to ask Paulo anymore and just got information from articles before. I asked Paulo what he needed to be removed or not but he just returned and understood it why I had him play himself. Since I did this in 2016, I had an actor in mind, but Paulo was the tough one, people would fear portraying themselves on film and it is what we had to play with. They would think he's like that but it's a role, but I understand their inhibitions. He just asked who the fangirl was and just told him then. "


Paolo Avelino shares "I didn't become a fan of sorts because it was not as usual for stars to go to Baguio when I was a kid. What's challenging here was the fact that I had to do it while I wasn't acting. (I asked about his tweets in the past months and asked if it was connected in some way with this). No John, those tweets came before making this film. These days I'm not so active on social media, my fans remain the same, mostly moms or grandmoms. Charlie and I might or might not have kissing scenes, you might need to interpret it and see if it is okay with what we see in this film. Maybe one thing that you'll see here is me being a father, another is being optimistic, how I finish things, and how simple I am as a person behind the camera. I like it quiet, I hope it transcends into the film. You wouldn't think Direk would do this, that is what peaked my interest when I did this film. I don't categorize dates, if we jive then we can date, she can go here in my house if she wants. Most of the people behind Paunatics are pros, they are tamed, they are normal people and I talk to them like that. Paulo Avelino in the script isn't too far from who I am, but wether it is fictional or not I'm okay with it. When I read it, I only processed it in a few days. It wasn't so hard, I just did it for Antonette (he kids) but it was really a good material honestly. I find Charlie cute, she was like high school, very innocent, when I talked to her, I saw why she was chosen to play this role."

Charlie Dizon says "Yes, just like anyone, I have been a fan of someone. I went to a mall show of Richard Gutierrez and I did kinda experience it too. I was in the crowd, screaming his name, I did that back in the days. Now my family is very happy, they always asked about the progress of filming this and I'm actually very nervous when  they see this film. I couldn't imagine kissing my idol in real life, it's out of my league. I would date a fan, if it were me I would want that. I also talk to my fans like that which is why I am also in a group chat with them. I am a KPOP fan, an FX fan because I wanted to become a rapper. I tried out doing that in Korea and I met them, I debuted there and got inspired training. My real name isn't Charlie Dizon, it's a screen name but I got Dizon from my Mom. I would want to be with Park Seo Joon, he's my ideal guy and if ever I got the chance to work with him I'd love that, together  with John Lloyd Cruz, I got to hug him in a movie project.

This is going to premiere on December 25. Go watch it for its merits and see why this is loved internationally too!