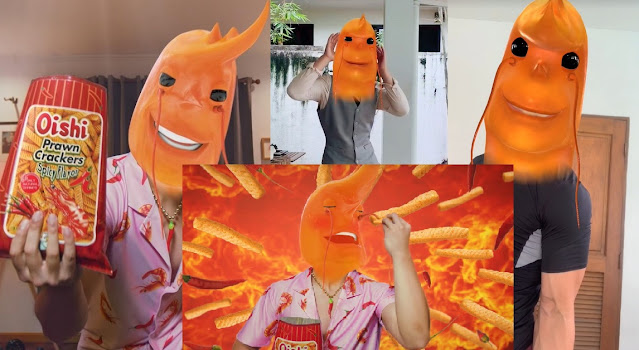 Social media has been flooded with images that are supposed to be seen in summer. Tons of Hipons bare mounds and mounds of Spicy OISHI Prawn Crackers on hand and funky dance moves over at Tiktok, IG and even on Facebook. What is this? Where did it come from? Why?

His name is HOT HIPON, the newest influencer around town and he's been making the moves noticed via the #HOTtawChallenge which he also did with celebrity friends (yes he's got that hooked) namely Rayver Cruz, Riva Quenery, Maverick Legaspi, Ruru Madrid and Gabbi Garcia. There are actually more, but for starters, the #1 spicy seafood snack in the Philippines is just inviting you to join in the craze by doing the same thing on your social channels. There will be a huge face reveal to see who this guy is, so now go to TikTok and Instagramthen tag @hothipon so he knows what you're doing. There's an AR for it too, so those who feel like being a hipon for a day, it'll be doubly easy.

While you're at it, go chomp on the Spicy Oishi Prawn Crackers and see how it makes your moves even hotter. I did, but not dance, I ate them all LOL!