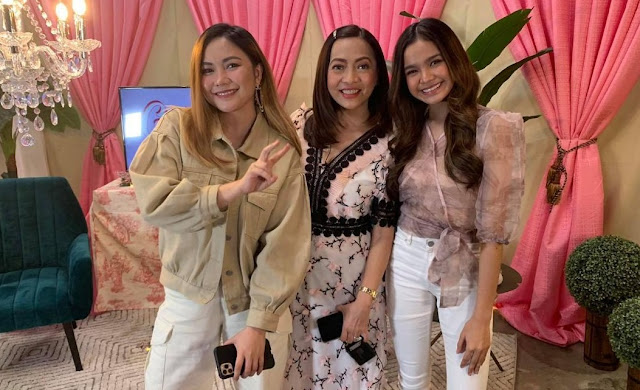 It's been a while since we've gotten to talk to Yeng Constantino. I was a little too excited to get to see and hear about what she's been doing these past few months + during the pandemic so when the opportunity to interview her for a show came up, I said yes. The kind people from Cornerstone Entertainment introduced us to the hosts of their online show called GRATEFFUL TUESDAYS hosted by Madame Pinky Tobiano and Yeng Constantino. This was the first time for me to hear about Miss Pinky but hearing about her work as a Chemist and host of this show, I wondered what she was doing with charity work which the show seemed to be inclined with.

Looking at her social media channels, it looks like she's been doing this for quite a while and honestly, when I saw how Yeng was talking about Ms. Pinky, I could see how her face lights up and how inspired she became after seeing the kind woman do her work. I felt their honesty, eagerness to actually help without asking anything in return which I think is a good trait of a public servant. Yet they remained very private citizens all these years, albeit helping thousands of families before and during the pandemic. Their show is currently being aired on CSTV (Cornerstone TV) which is on their Facebook page and YouTube channel. In it they continue to share not just their blessings, but stories of ordinary people that would really inspire others who fall into the same predicament. It was at this time when I felt that whoa, it's so nice to see someone from the private sector do so many good things, seeing this, I felt Ms. Pinky was really inspiring a lot of people (now that includes me).

During their last episode which was aired November 24th, they included their relief efforts from communities in Cagayan, Marikina, Rizal which involved over 7,000 families all in all. She organized this and seeked the help of a lot of celebrities, very influential friends, artists, in a Care and Share program they developed for the show. This is for the benefit of the victims of Typhoon Ulysses which wreaked havoc in different places in Luzon. With Mayor Chavit Singson arranging three planes for the relief goods to be sent to the Cagayan valley, they were able to help people from Tugegarao and nearby cities and municipalities. Ms. Pinky was flanked by Ruffa Gutierrez and KC Concepcion during that time and they did a lot in a span of a few days. In the east of Manila, they got Yeng with a team to help with relief efforts they did in Marikina and Rizal where she was from. I promptly asked what was fueling their passion and why they were not getting exhausted doing this, they shared their answers during a short Q and A via a virtual blogcon, I liked what I heard.

Seeing this, I was a little too shy I didn't get to help much during those times, I only referred people and spread information about charities that could help digitally after the typhoon. But felt good when I realized what Yeng referred to as your way to help. You can only do so much, but it starts with that. You just have to do what you can do in times of crisis. They also mentioned how they didn't wait for government efforts anymore and started helping with their own capacity, it's amazing what you can do with that. I understood that it's not how big or small you're giving, every little thing can go a long way... and can mean so much for other people. They also are making the necessary steps to not just give plain relief for them, they are teaching them entrepreneurial things so they can make a living. Aside from that, they also announced that they will be giving away 10 full college scholarships to deserving students. They also are choosing several individuals to get a Jeepney turned Sari Sari Store which they call Sari-Jeepneys which you'll all see in the coming months.

The new season of GRATEFUL TUESDAYS will be seen from 7-8pm on the Cornerstone YouTube Account, the CSTV FB and Chemist Pinky Tobiano's FB Page. They will also be available on the CSTV KUMU account so make sure you also download that platform. Yeng now is enjoying her time with a bunch of her friends who now are starting to pool resources so they can help their own communities. How I wish I could do the same now in my own hood when the time comes, or perhaps lead one and help other communities who need it. I think this show sparks that, yes, it sparks hope.