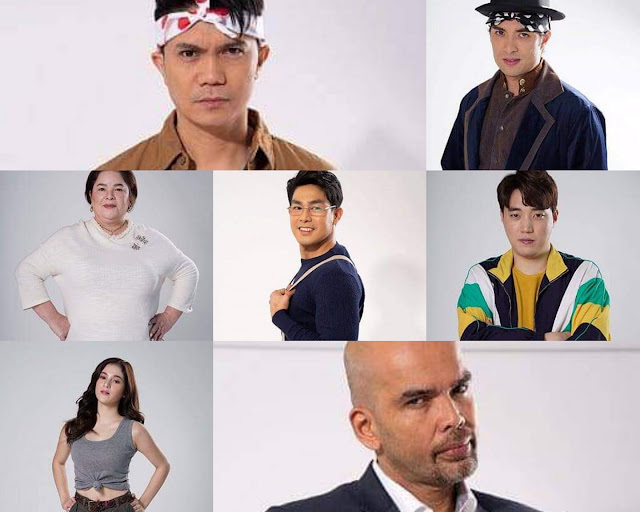 This is produced by CINE KO Productions and Star Cinema. On Christmas day, we'll see a dose of comedy courtesy of this film derived from the 80's iconic film of the same name, Mang Kepweng. This generation has a different spin on it so they properly called it Mang Kepweng: Ang Lihim ng Bandanang Itim.


Tickets are now on sale via upstream.ph. We talked to the stars this evening and they had a lot of stories. Here's some of their statements during the zoom conference.


Fumiya says "We are together here, my best friend is Yamyam and it's a complicated relationship. We are dwarfs but we don't get along that well."

Yamyam says "My role here is a dwarf that could give Mang Kepweng the direction so he can get the magic for his bandana. My grandpa was actually an albularyo, he cured me with a lot of rare leaves and roots, he used a few on me with smoke, he told me I was really punished by spirits hence a lot of bumps on my skin appeared. I got smoked, I got prayed upon and got cured by my grandfather, I believe 50%, I don't know for sure but I think it was true."

Ritz Azul was a bit perky during the call and says "I am the queen of Engkadya and I'll be helping Mang Kepweng fight Maximus on his journey to find magic on his own polkadot bandana. I did experience a lot of albularyos in our province, they did dishes, eggs, they pass on powers to people, there are lots of things that I can explain but they do get cured."

Joross Gamboa plays the villain of the film and he says "I am the enemy here, I have the black bandana and I will make Mang Kepweng's life miserable. This film is for the whole family so make sure you do this Christmas. There are a few comedians that can whip their faces like that, who can make funny faces and comedy out of it, Vhong is qualified to do it."

Ryan Bang joked around and said  "Of all the friends of Mang Kepweng, I am the most good looking... almost 70 percent I will be with him in his adventures. I read the script so many times but when I get to the set I just end up with people who will not go with the script. This is for kids, I hope people will see it because it's fun, it's just that so many things happening here but I don't know what it means. I hope you become happy watching this but if you don't we can't do anything really."

Ms. Jaclyn Jose says "I am the mother of Mang Kepweng here and I have been since the first one, so they have no choice but get me for this second installment. The albularyos of the first Mang Kepweng has been brought to this generation, I watched the original in the cinema, he can play Chiquito really.I love the cinema, I hope we could watch it there instead but I'm not worried, I'm sure it will be back. I want people to forget problems, this film is funny and if you could forget an hour and a half of those problems, I'd be really glad."

Barbie Imperial says "I have a lot of experience being cured by albularyos, in the province we really believe in them and I had to seek their help because I always get sick when I was a kid. I wasn't able to get help from doctors, but when I seeked their help, I got better. In Bicol, I got treatment from them and with that experience, I really did get healed."

Vhong Navarro was so proud of this film and he says "I play MK or Mang Kepweng, he will be continuing with his mission to cure everything. He will need his friends to fight aliens, monsters, without facial mask or shields because this was shot before the pandemic. I am sure though that you will enjoy this film, you just need to look for Mang Kepweng on upstream.ph and pay 250 only to watch it with your family.That's what new technology can do this MMFF 2020 and Christmas. I wanted to really look for the copy of the original Mang Kepweng but the quality of those on digital is just too poor, but I'm glad CineKO agreed to do a part 2 because this was their baby and together with Star Cinema there will be a good comeback. I'm also glad they chose me to play the lead role again, I was chosen because they see Chiquito in me so I reprised the role again. I don't think it's bad to believe in things that could better health with faith and albularyos. We even filmed everything on the actual home of Mang Kepweng during the 80's and that connects the generation. We're both happy and sad because we got in the MMFF 2020 but a little sad about how it's different on how we watch movies without movie houses. It's good though because a lot of people will learn on how to use technology. I haven't really researched about albularyos and just based what I am doing with the character of the late Chiquito, I am privileged to be able to do this as my first film that got a sequel. It's a good feeling because people loved it, the producers believed in me again and I got to work with brilliant writers that made this even better. I want to make sure it would be better than the first one because we'll put a lot of adventures in Mang Kepweng now."