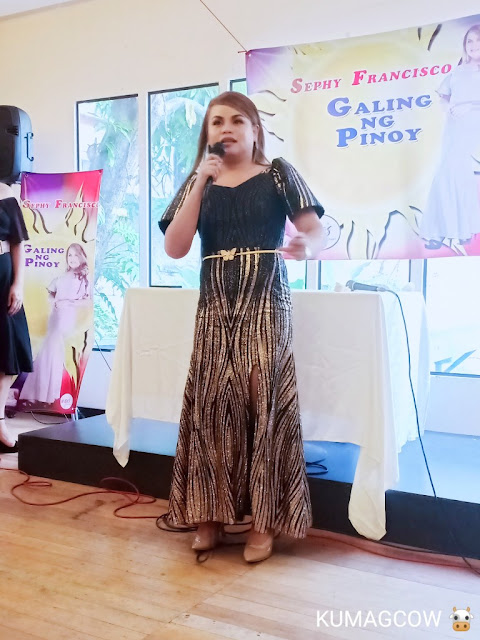 I have been watching her journey as a singer including her stint in I Can See Your Voice here in the Philippines and on the world stage at the Korean ICSYV version. She has undoubtedly impressed everyone with her voice, singing hits by Mariah Carey, Celine Dion, Regine Velasquez too. She has long gone from her BPO Call Center profession and now is a full time singer. She's Sephy Francisco and she's set to release her first single called "Galing ng Pinoy".

She also went to XFactor UK and stunned judges including Simon Cowell, that's a big deal. She has performed in different countries like Japan, Korea, Malaysia, Cambodia, Indonesia and soon Hong Kong and Singapore. She comes well applauded and is happy she is going to acheive her dreams!

Ang Galing Ng Pinoy is composed by Junn Sta. Maria and the rap part is by Reck Cardinales. This is produced by Leah Cortez Morada. It talks about how Filipinos should be proud about their work, their acheivements and how they should instill nationalism. It will be available in all streaming platforms like Spotify, iTunes and her music video on YouTube.

Sephy says "I have been bullied in school just like other trans people. I had to work to make ends meet because I am a the bread winner. It wasn't planned but because I was only available this week, I got to do this, it just was the SEA Games is happening too. We have other singers doing this, but I'm different, I do both voices and perhaps because it is international. I got into XFactor UK and auditioned online. I thought they were going to pay for everything but they didn't. I got help from Leah Morada. She arranged for a concert and got me stay in her sister's house. Simon advised me to really save money because it is going viral. I am just blessed."

When I asked how she would feel if she didn't get her goal, she says "I will never stop singing because this is my dream. This is everything I wished for. I just want to thank everyone who made this possible. I hope people could listen to it and be proud of who they are. Thank you Leah Morada who made Sephy who she is today!"

Now you're going to start to listen to her, I am quite sure of it.