The Amazing Betong Sumaya in Concert at the Music Museum 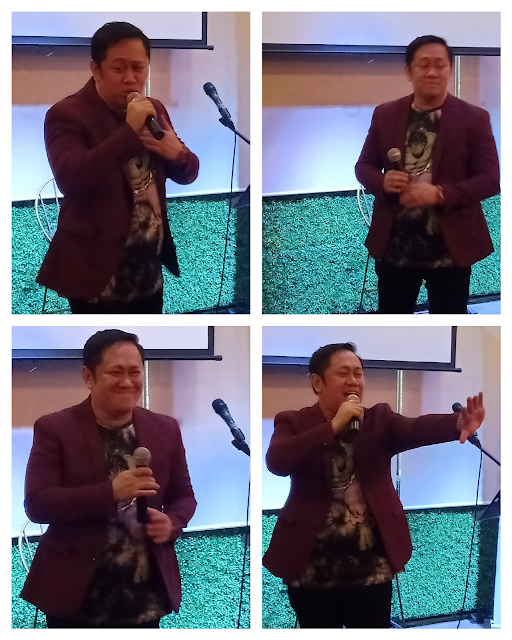 He starts by saying "If you guys know the song, just keep it in your mind."

Betong says “I didn’t have confidence really but have been contemplating on doing this two years ago. I was an amaturista, brought up by my Mom who pushed me to join competitions when I was a kid. I lived in Antipolo, I didn’t really anticipate I’ll have a concert when I joined GMA because I was always working behind the camera, then went in front to do re-enactments for Kay Susan Tayo. When Survivor came, it was just a big opportunity and then I joined Bubble Gang. In the concert, it won’t be fully just be comedy, I will have song and dance numbers. I will also have guests because honestly, I am thankful they heeded my call for their help for this concert. I personally texted each of them and did the rounds, I also tried to call a lot of other stars and it was a mess with their schedules but they all were willing to join me in my birthday concert. I wanted of course to have more, but some of them have yet to say yes. I wanted a dance showdown but Alden wanted a song and dance number, so we are arranging that to happen. The songs have been chosen by me, I believe they are very close to my heart. I used to go to provinces and perform them, I also included songs which inspired me by great Filipino balladeers. Mae was super ready to be with me, and Sir Dingdong called me who was excited for me. I was too shy to ask him but he was so enthusiastic when he called me, I hope Ms Marian also comes because they have been a huge part of my career. I will try to sing, I will try dance, I will try to act (with Bitoy), I will try not to perspire. I will also try to make the Music Museum full. I am thankful to Artist Center because I didn’t ask much but they have been forwarding a lot of things for me to try. I was supposed to release my first single but they just ran out of time because we have 16 guests, we might head off doing Unang Hirit the next day. This is very meaningful for me, because it is my birthday, and also my Dad’s birthday. He would have wanted to see me on TV, he didn’t get to see this. I also will dedicated this to my family. I may perhaps try writing songs soon, also will release a single via GMA Record. This Friday we will be giving you Scavengers, a two part special for the anniversary of Bubble Gang. Antonietta will be part of the concert, she may have guests as well. We will keep it a surprise.”