Inigo Pascual Shares Experience in BOYETTE: Not A Girl, Yet 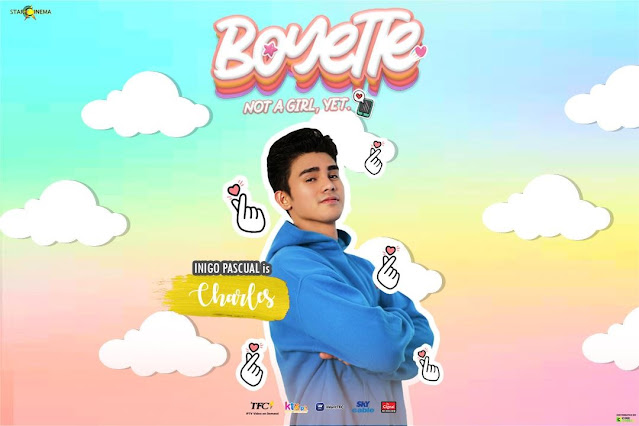 Zaijian Jaranilla is starring in a coming of age film produced by Star Cinema called BOYETTE: Not A Girl, Yet which will show on November 27 via KTX.PH and the iWant TFC app, CIGNAL and SkyCable Pay Per View channels on the same date.

Inigo Pascual plays Charles, a jock who will be Zaijian Jaranilla's love interest in the film. Zaijian will try to woo him by joining his dance crew and acting like a straight guy, will this become a love story or will it be utter disaster? That remains to be seen.

Inigo says "I am Charles, he's my best friend and we grew up together. I transferred when we were kids and just saw each other in college. I didn't know he was already Boyette, and initially I only knew him as Boyet, these are two different things. We then are going to discover how he was able to find out who he really is. I just enjoyed this really, it was not heavy, but there is a conflict because Charles is a homophobe. Direk Jumbo made it easy for me because he gave us freedom on what we could do as well. I enjoyed the locked in taping, it was safe for us. We did swab tests before, during and after. You kinda didn't go far with your character. We were able to immerse and become really close."

"Ever since the start, I didn't see anything bad being Piolo's son. It was a blessing for me, I can show who I am, my talent, to make my own name. I had my own thing that I want to do, I had the chance to explore and I didn't get to worry about that because he is really my Dad. I'm proud of him really." 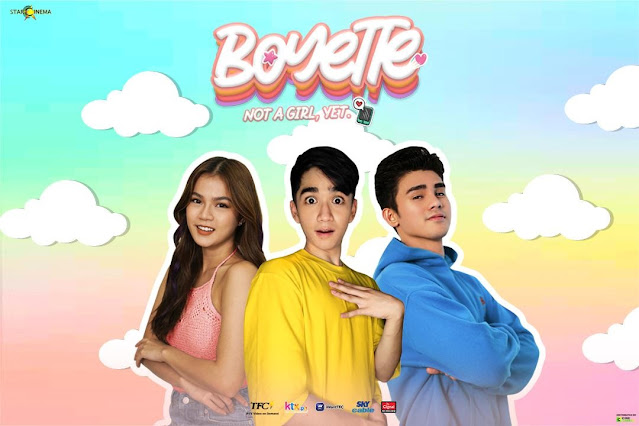 He added "There were plans, a lot of them got cancelled because of the pandemic. I feel like things had to change because of it and for me, all I wanted to do is share what I have. I was able to release and share my music to everyone. I felt one day that I wanted to do a project, and the offer came a few days after. They assured us it was safe and protocols were observed. I just enjoyed acting, to explore it more, together with my music with Tarsier and of course local music. Before Boyette, we didn't have to talk about network wars, I'm personally against that. As long as we entertain people, I'm all for that. For me, I grew up not judging people, everyone has their own preference. They are human, and there is always a common ground. I've had friends who came out to me, they trust me that much, I comfort them and tell them there's nothing wrong with that."

"During work, we had two days off in a week and we used that to bond quite frequently. We had to do that too because we had to have that eagerness to hang out with him. I learned a lot from that kid even if he's younger than me. We didn't have air in between us, we just had a fun time doing it. I miss the classroom setting, I just don't miss the homework. For me, getting noticed by LGBT or anyone for that matter, I feel happy. If they look at me like I'm their crush, I'm quite okay with it, nothing really wrong about that. When I'm alone, I write songs and the pandemic time was pretty productive for me. I also did some projects and shows in between aside from Boyette. This is my reunion movie with Mariz. There was a moment where we were just talking to each other, and she shared her music with me, I cherished that moment. Whatever we talked about during that time, we understood each other, and I really miss that. This is the first time I saw her that she's not trying to impress people, she was so comfortable and confident and I was so happy to see that. This is the first time I've seen her like that while we were making a comedy film. We also roam around even if we had days off and we enjoyed that part. To clear things, we did go through things as a love team and as a pair. I can't say that much, it was 2 or 3 years working with each other and... (he stops)... (When he was asked if she is attracted to Mariz) When you see her, it's hard not to be at awe with what she is doing. I do think about having relationships but if in a lockdown, that is hard. I long for physical contact, I'm a hugger and it is a bit hard to do that in this time. Charles has so much experience, he had to hide things and not everyone sees his troubles. It was easy to do his character because in a way I can relate to him being happy, being a dancer, and how he doesn't choose his friends. I can't say we're like the same person, because I'm not a homophobe. If I were given the role of Boyette, it would be challenging to do that. It was such a beautiful thing to do a role that has been real for our Director, it is his life story."

It was nice to see Inigo a little uncomfortable answering stuff like that. It felt real and sincere. I hope fans get to see their film BOYETTE: Not A Girl, Yet because it is in some way, a good representation of who they are as artists now. We all have that friend, or people we know who are also like Boyette, Inigo also told us we should know their plight. To see their struggle, to show how they love, and make sure they know there is nothing wrong with that.