Who Will Maris Racal Choose on "Stay In Love"? 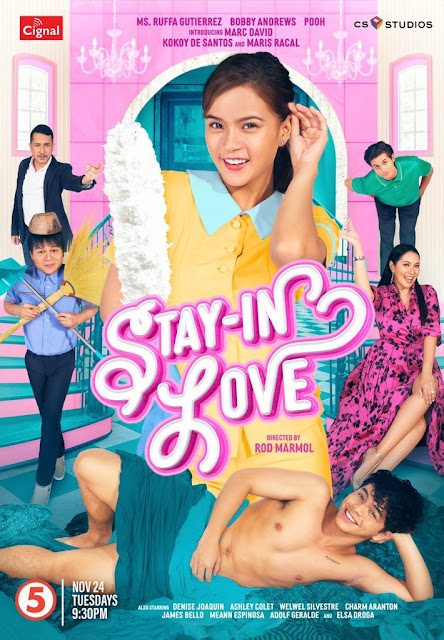 As part of TV5's new throng of shows in the primetime todo lineup, Maris Racal, Kokoy De Santos and Marc David will star in this romcom called Stay In Love. In a press conference hosted by Cornerstone this evening, we got to ask a few questions from them.


Direk Rod Marmol was also there to talk about the project and he says "Stay In Love is one of the hardest things to shoot because it is a comedy. From the get go, I reminded them to have fun with the character, with the set, and I think they have done that in every scene they were in. I'm also blessed to have a team that worked so hard to make this an enjoyable one."

Although new in the industry, this is Marc David's biggest break. He plays Hero, a very helpful person. He's ready to save Diding in any situation. Marc says "I was grateful to be chosen by my management (Cornerstone) to do this as my first project. When I read the script, this wasn't too far from who I am as a person. I was nervous, but it was easier for me because we had those similarities. This is my first time, it was nice to be more comfortable to do other things so I could be better.


Kokoy De Santos on the other hand has already worked with Maris in past projects. For him, he's got an advantage because he wasn't too shy anymore when in a scene with Maris. He plays Dodong, another guy who's very romantic and as he describes "I'm very malandi, but very sincere". Kokoy adds "I had to detach myself from my previous role (hello Gavreel), what helped most is the people I worked with to make the character work."

Maris Racal plays Diding, a provincial girl who goes to Manila and is very innocent. She also worked as a maid to make ends meet. She says "When I got news about this show, I felt really game about this project. To know that I'm going to have a lead role and do this, it's not the typical yaya, not a stepping stone, but she wants to dream, she grew up knowing she wants to do this because she wasn't that optimistic. I have moments like that, I don't know if you watched The Office, I pegged my character around her and it is a large contribution for the show. I needed to be comfortable with Marc, he is very deep, I needed conversations and we got to talk about life. Kokoy on the other hand and I have had the chance to work before, he is very confident, I would be direct with what I want, I make sure that I give all, the love you think the person deserves so I don't have regrets."


They were all so amazingly so receptive of how they like each other. Maris can like someone like Kokoy, she also can end up with someone like Marc. The boys also shared their amusement of Maris' personality. She's very bubbly, smart, and beautiful. I couldn't blame them if they would fancy each other in the near future, but for now let's watch their story unfold on Stay In Love because pretty soon, Diding will belong to someone. You have to choose who you are rooting for too. This shows every Tuesday at 9:30PM on TV5!