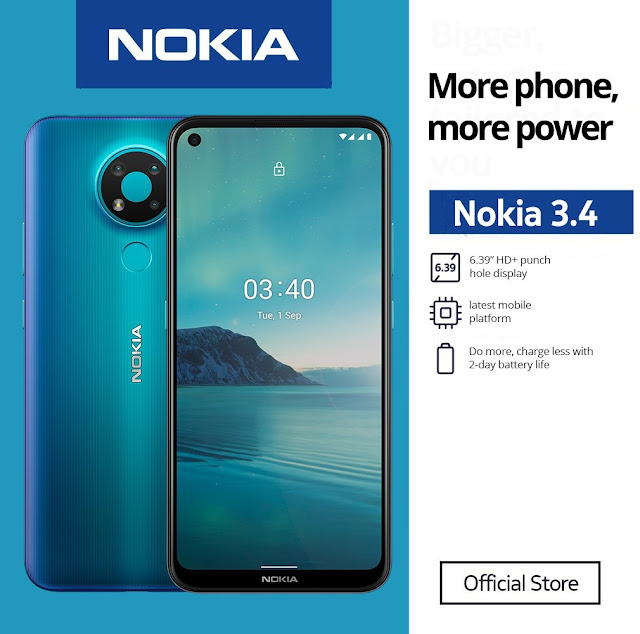 I still have my old Nokia 8210, Nokia 3210 and Nokia 6250 with me at home. It sounds Jurassic, but I've had them hidden in my cabinet because of nostalgia (and I'm pretty sure some of them still work). Thing is, they really have a few phones that are built for toughness like these ones. Times have changed and they had to adapt. Sure enough, they recently have been successfully putting out nice ones in the market. They also have used Android based OS so it gives a huge boost to a market they've been long missing, and they're practically best at it.

Recently, Nokia announced the release of Nokia 3.4. It was just this month, and what that means is that people would be able to experience the new generation of Nokia phones. The Nokia 3.4 has a 4GB RAM, 64GB storage, 6.39 inch HD screen. They will also be giving away a free Bluetooth device and Jelly Case which is quite a good deal. You may check out the phone on these links I arranged below. This one is for the official store and the actual phone they launched.

This phone also has a MicroSD card slot and it supports up to 512 GB for more storage. The Rear camera is comprised of Dual 13 MP lenses plus 2 MP for the depth sensor and another 5 MP ultra-wide shots. The front cam carries an 8MP one, which is pretty okay for selfies. It also has a 4000 mAh battery which can last you for hours. This also has dual SIM slots so you don't have to have different phones for different networks. Go download the Shopee App now via Google Play or the App Store so you can use vouchers, coins and free delivery if you wish to have one. Also, you're going to be one of the first ones who could have it because it is a Shopee exclusive. Things run out fast, so make sure you won't be late if it drops on that date!