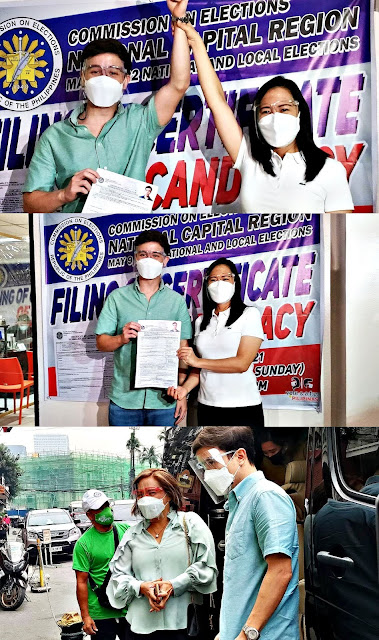 Yes, ladies and gentlemen... the internationally acclaimed actor and head honcho of Feelmaking Productions is taking his passion for service a notch higher as he filed his certificate of candidacy today as he runs for a seat in congress for the 1st District of Quezon City.

Present during his appearance in Intramuros, Manila was his mother Ms. Sylvia Sanchez and Mr. Art Atayde. He was also flanked by current Quezon City Mayor Joy Belmonte. Arjo reiterated "The pandemic has made me realize that I needed to be the person to provide service to the people in my district. I've been really interested in doing this since highschool and the COVID situtaion made me ask when and how. I know the public deserves leaders that are sincere, the dignity and compassion to serve the people. Everyone deserves help."

He was also asked about Maine and said that she fully supports his decision to run in District 1. The district by the way is composed of 142 Barangays and he's planning to champion causes for healthcare, employment and education. Ms. Sylvia also stated "I told him that I will support him, he needs to serve his constituents well, not fool anyone or steal otherwise I'll throw him a punch!" she said jokingly. Arjo says "Trust that I will serve District 1 of Quezon City well. I will not fool them, nor will I steal from the city's coffers."

That statement alone is a testament of his eagerness to serve, you guys and gals from District 1 are lucky.