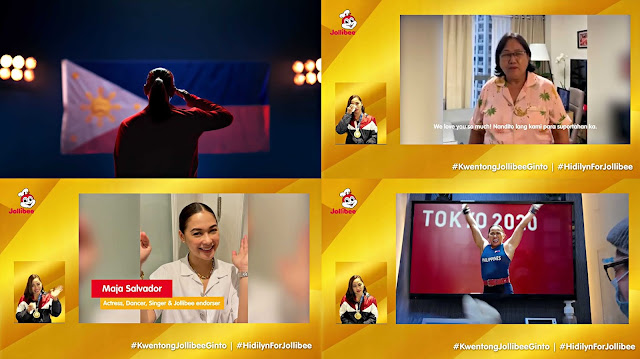 She surprised a lot of people when she stepped up to the plate and won an Olympic gold medal for the Philippines. 2021 is the year she set a new Olympic Record in historic fashion, after years of hard work, tough training and dedication to a sport she loves, she's brought the country insurmountable pride.

The country's favorite fast food champ Jollibee knows that her story needs to be told in order to inspire a lot of people, hence this shortfilm called "GINTO" was done together with its partner agency McCann Worldgroup Philippines. They hope this would bring joy and inspiration not only for aspiring athletes, but to every Filipino who's got dreams.

Hidilyn once trained with water jugs and sacks of sands from construction sites. She almost gave up on her dreams, but she kept on going. In 2016, she got the silver medal in her weight class at the Rio Olympics, which has inspired even more athletes. It made her work even harder to get the gold medal in the next meet. When she saw the short film, she cried seeing the front-liners and kids cheering for her. She admits feeling the joy, the hardships, the things that have strengthened her during the toughest times. She also got the chance to act in the short film, which she feels was very rewarding because she's seeing it from another perspective.

Hidilyn is now trying to finish her studies (in DLS CSB) and prioritize training for the next Olympics. She wants to put up a training facility /schools so she could help aspiring athletes, like what she had experience when she was a budding weightlifer. The #KwentongJollibee Ginto was also done by award winning director Pepe Diokno. Hidilyn wishes she would share her passion and perhaps do outreach activities in the next few months.

If you want to see it, it's now up on the Jollibee Studios YouTube channel. Go react on social media and see how you like #KwentongJollibeeGinto and how she triumphed over adversities.