The Day I Made GIGI DE LANA Cry 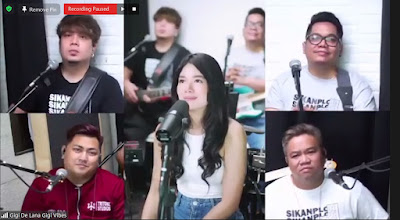 Her viral performance of "Bakit Nga Ba Mahal Kita" got 13.5 Million views and now, getting thousands of viewers every night they perform, people certainly can't get enough of her... she's Gigi Delana and her band Gigi Vibes. Recently, they released their first original song called SAKALAM, and true enough, they've landed on Spotify's #1 Fresh Picks and garnering still, a growing number of streams in the platform.

They're also releasing a music video for it and a teaser was shown during the presscon, and by the looks of it, you'll love that too. It will premiere today October 11, at 6PM ono all of ABSCBN's socials and broadcast channels. Gigi says "My heart is full because we've gone through a lot. We're very thankful for that, I would like to thank everyone in my band, the management, the people that believe in us, we are so grateful to become your kapamilya. Thank you Lord for giving us this blessing. There were a lot of things happening during the shoot of the video, I couldn't show the right emotions initially, I was strong because I didn't want to cry, I don't want to feel the hurt, so I kinda shut down, but I have to feel it again, the feeling of being human. Thank you to GG Vibes, to Marcus Patterson, to our Director thank you so much. What made me strong was my experiences, the people that inspired me especially now, my bandmates, my Mom, the people I get to grow with. I take that in because it will make me better, they know I will grow." Here's a bit of the presscon on video, enjoy!

I made Gigi De Lana Cry with my question about love and learning from her heartbreak. But as always, I am so thankful that we got to talke to them and see a different side to the band and Gigi De Lana. Thank you to ABSCBN PR for having us! Their music video will premiere tonight at GG Vibes YouTube channel so watch it at 6PM!