CONG vs IVANA ALAWI on Mountain Dew's Battle of Bangis! 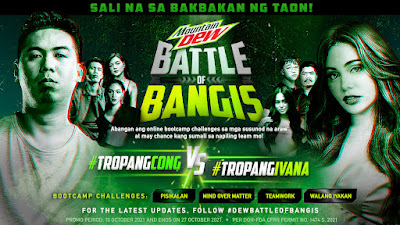 Two massive online personalities, one is Cong of CONGTV and the other, Ivana Alawi. Cong is funny, hits the right notes when it comes to gaming, Ivana on the other hand just have so much men adore her. Now what if these two gigantic personalities on YouTube suddenly had to battle it out? What am I talking about? It's called BATTLE OF BANGIS. It's Mountain Dew's very own way to test who's the best in physical, mental, emotional strength and teamwork.

Now how do they do this? Easy. From October 10 to 27, the two and their respective teammates will undergo several bootcamp challenges in categories like Pisikalan, Walang Iyakan, Mind Over Matter then Tropahan. This means they'll be going through different adventures and activities to see who's best. Then they will have the finale Mountain Dew Battle of Bangis D'Ultimate Showdown on the 7th of November, that's next month.

This all started when Junnie Boy thanked the public when they worked with James Reid. They kinda started wishing who they wanted to collaborate with and out of his mouth he uttered the name of Ivana Alawi. Ivana then posted in another vlog that she's accepting the challenge and said "Bangis Tayo Eh!". And now, we can't wait to see what will happen next!

Oh and for those who would watch Cong and Ivana from the comforts of their homes, you too will have the chance to win the Mountain Dew Battle of Bangis. Just do your take of the challenges you see in the bootcamp and shoot a video, upload it on FB (publicly) and use the hashtag #DewBattleOfBangis and it'll count as an entry. That way, you can be part of their team.

Cong will team up with Mika Salamanca, Junnie Boy and Sachzna. Ivana on the other hand will be playing with Khengi Saito, Tiktok femme Yuki Takahashi and Albert Nicolas. They'll be recruiting 6 of you who will post your entries on social media then face each other in the finals. It'll be hosted by Sam YG and James Reid will also be there to witness the festivities. It will be streamed on Mountain Dew's Facebook pga on the consecutive weeks, and the finals of course.

Proceeds of this particular event will go to chosen charities Streets School and Child Hope. They are causes that are close to Ivana and Cong's heart. They will be providing new tablets for their school needs. Winner gets 100 tablets, the other will get 50. If you want to know more, check out this video!


Like their social channels if you want to know more!