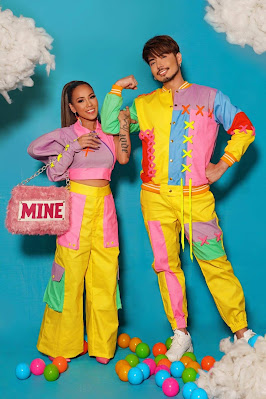 It's rainbows and butterflies this month for viral online seller Madam Inutz as her career skyrockets on TV and the internet. She's currently being taken under the wing of former Mr. Gay World - philanthropist and Entertainment Tycoon Wilbert Tolentino.

Before Madam Inutz went inside the Pinoy Big Brother House, she released a single and music video called "INUTIL". Aside from that, she's also recorded a second single called "Sangkap ng Pasko" which is a little different from her first one which is more on the novelty side. This time, you're going to see a more heartfelt song because it's all about family. Wilbert says "You'll shed a tear or two with this one because the only ingredient that's innate in Filipinos is the love for family. Madam Inutz actually cried hearing this song because like it, she takes a lot of importance with family."

Aside from that, the surprises from Wilbert aka Kuya Wil has not stopped. Before Madam Inutz went into the quarantine, he gifted a brand new House and Lot. If you haven't seen it yet, here's the surprise that they uploaded on YouTube recently.

Here's the latest music video that they made for the song

Soon, they also plan to put a third floor so they could house all of Madam Inutz's family. Aside from the PBB stint, he's also accepting endorsements for her. This is how Wilbert will try and secure the future of the viral star, and her family. If you're interested, you may contact them via 09175INUTIL / 09175468845 or Email them via DLINUTIL@GMAIL.COM. You may also subscribe on their YouTube channel by searching Wilbert Tolentino VLOGS or Daisy Lopez.