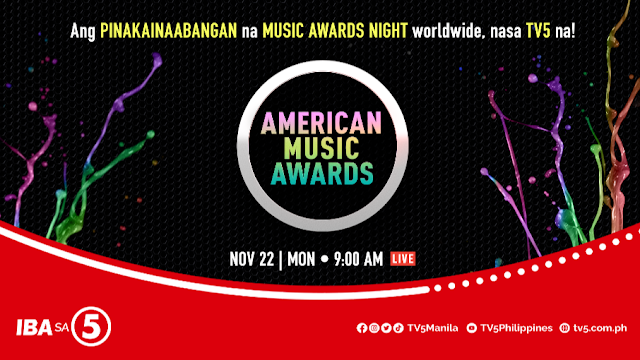 Looks like the Philippines will have to wake up early to see who among their favorite American artists would win at the 2021 American Music Awards. It's going to be aired this Monday at 9AM Philippine time.

Among those expected to be adored in this year's festivities are artists Bruno Mars, the phenomenal BTS, Taylor Swift, Ariana Grande, Olivia Rodrigo, The Weeknd and a whole lot more. AMA's remain to be the biggest fan vote based awards and you can vote for your favorite artists on TikTok by just searching for AMAs on the app. Performances by world class artists are expected from various genres including POP, RnB, Country, latin, KPOP and a whole lot more. The show will be hosted by the well loved Cardi B whom herself is an AMA award winner. She also is nominated for 3 of them this year.

I heard BTS Army members should look forward to a memorable performance from their idols because it'll be a different "Butter" that they will see during the event. Aside from that, you will witness performances from Bruno Mars, Anderson, Paak, Bad Bunny, Tainy, Julieta Venegas, Carrie Underwood, Jason Aldean, Kane Brown, New Edition, New Kids On the Block, Diplo, Maneskin, Mickey Guyton, Tyler the Creator, Walker Hayes and Zoe Wees among other surprises. You can get realtime updates too on TV5 so make sure you participate in the Twitter party that they'll be holding for you. Follow their official hashtags #AMAs and #AMAsOnTV5. Remember, 9AM on TV5!