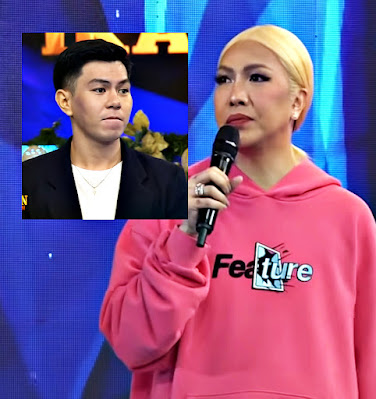 You know, there's something about having Vice Ganda on "It's Showtime!" that really works. Vice makes you think of a lot of things, and he makes it make sense. This afternoon's episode was a little controversial, but if you hear why Vice Ganda said it, you would know why she said "If Wala Kang Pera, Wag Kang Magjowa!"

Vice says "We know so many people, but we didn't take time to get to know ourselves. There's a saying that goes "Be so true to thyself as though not to be false to others". "

Vice further adds "If you don't have money, don't start a relationship. I'm not saying not to love someone, because that's a given. What I'm saying is that getting into a relationship is different. For starters, how awkward would it to be in a relationship and put all the burden to a guy right? You already have a problem, that's money, it's a social problem... and it's our job on how to find ways to earn a living. It's a personal responsibility, and if you can't do that, why in the world would you delve into another responsibility. A relationship is not just flirting, it's a responsibility, to nurture, something to take care of. It's not like studying that if you can't afford one, you'll get scholarships, you both should give what you can to make it work. What if you get her pregnant? You can't put that burden on your parents, on your mother, you can't feed them with money from other people. I remember the time I've listened to stories from Reyna ng Tahanan, and being in a relationship and making a family is a huge responsibility. Your friends can't pay for that, I remember a lot of my friends go out even if they don't have money. But if they make an occasion happen and plan everything, you can do that every once in a while, but not all the time."

Vhong Navarro interjects and says "Yes, it's sad to not have a relationship, but you have to be responsible. It's like going to war without bullets."

Vice may have been joking around much in the "It's Showtime!" set but you've got to admit, that right there is REAL TALK. It's realistic and sound advise about love and relationships which Vice has a pretty good grasp of.

Have you ever had one of those times when Vice talks and you got affected? Tell me about it!