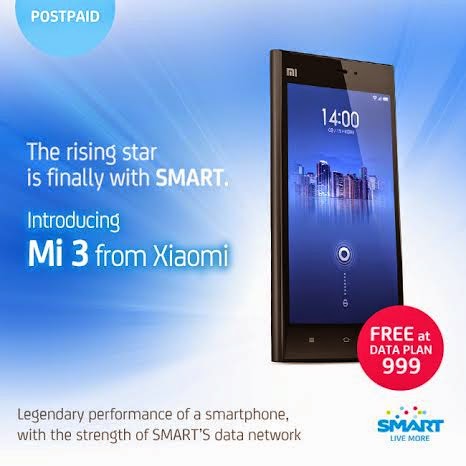 The very first time I saw this phone was when it was handled by a tech writer from Manila Bulletin. It did spark my interest at that time because it's the rumored phone that did beat giants like Apple and Samsung in China, one of the largest retail markets in the world. The Mi3 XIAOMI has now arrived in the Philippines and no less than SMART, the biggest network in the Philippines is offering it on a postpaid plan, surprisingly even free on their Smart Data Plan 999 packages which started August 8, 2014.

Now when I stated that this phone has beaten leaders in the industry, I wasn't even talking about the specifications yet but overall if you compare the power it packs within it's 5.67x2.90x0.32 inch body, it's price point is going to be unbelievable. You can't even fathom how they put in a Qualcomm Snapdragon 800 chipset, have Quad Core processing and an Android Jellybean OS in its heart. It's got all the features of most advanced Android handsets but doesn't hurt you much in the bank. Standby power also can last around 500 hours, talk time up to 25 hours and about 50 hours of music play. It's got 16 GB of storage and a non removable 3050 mAh Lithium Ion battery that can prolly survive a whole normal mobile dependent day. The stunning 5 inch IPS display won't also disappoint you on 1080p videos and its 441 ppi pixel density. The thing even has cloud service that can get you easily sync files on your laptop of needed. Now if that doesn't meet your needs at this price point, I don't know what will.

Come and pre-order one of the best Android Phones in the market here from Smart; that not only works well, but costs quite reasonable too. It's perfect for the Filipino market where we want bang for the buck phones these days.  I rest my case.

http://www1.smart.com.ph/corporate
Posted by John Bueno at 3:19 AM