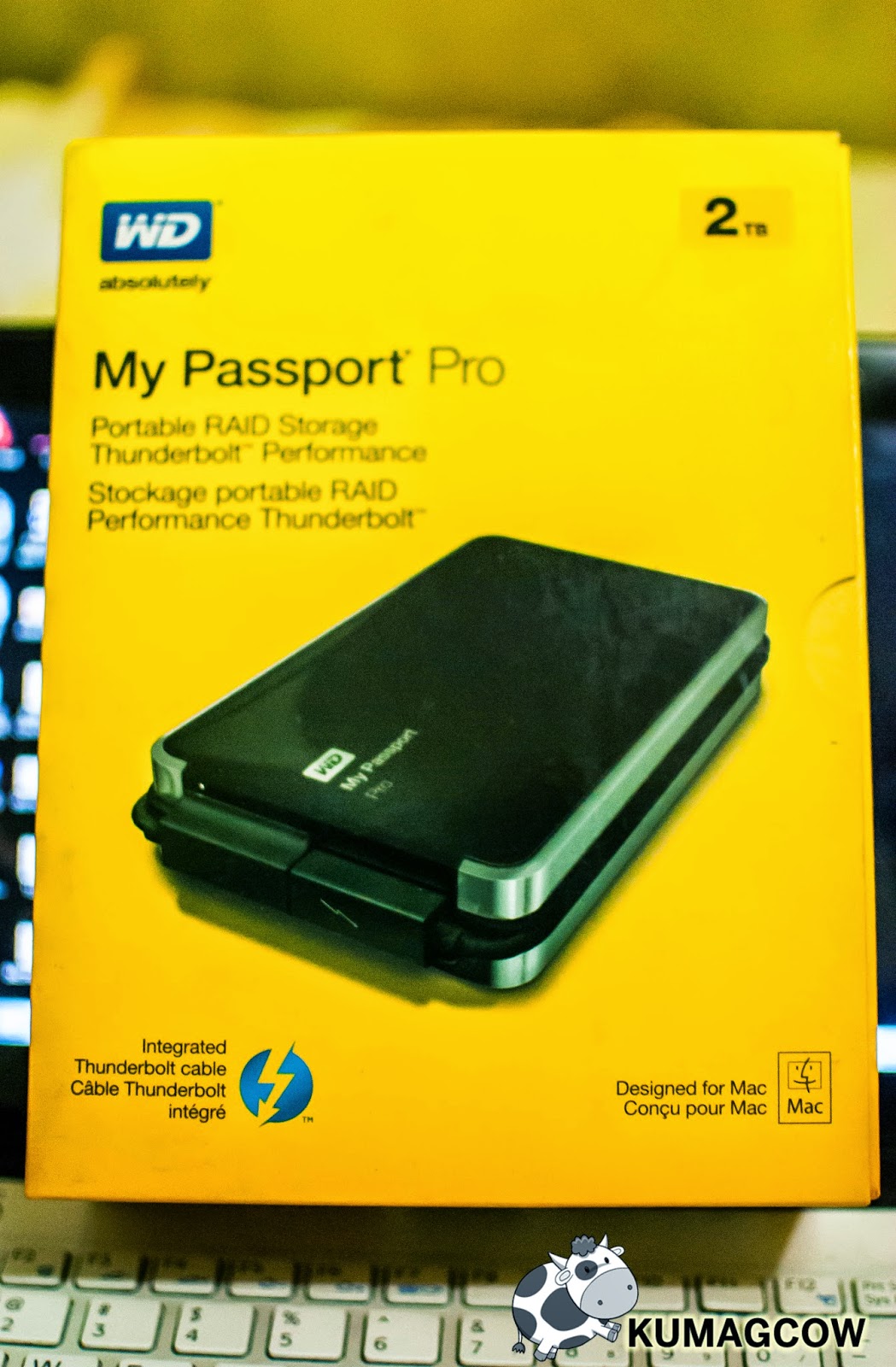 The Philippine market is saturated with hundreds of external drives. Many brands try to constitute themselves as the best there is in the market but I think the number one in terms of performance and quality as users have put them all there. We have different reasons but track record and longevity plus testimonials from previous buyers have solidified it. We'll take a look at one of their RAID drives that is specifically made for the Mac made by Western Digital  called the 2TB My Passport Pro. Let's do this shall we?

For those who don't know, prices actually differ on Mac machines if you want to have more storage; but for plain ones, you would only get 1TB and get solid state drives for faster performance. If you want more, you'll have to add a fortune again and that isn't a good option for most consumers.

A promising feature is this Thunderbolt cable which means data and power will all be done with one cable. It's built in on the drive which I'll show you in a bit. This feature actually sold me already because if you have power and data in one cable, that's technology working for you. It made me cringe about my existing 3TB external drive that has a different power and USB cable. I'm sure some of you do too.

Now, you have to remember that if it says it's "Designed for Mac" on the box, it means it won't work with anything else because most windows laptops won't have that Thunderbolt Cable I was referring to earlier as it doesn't even have a USB port.

Opening the box was a breeze. It has one outer cover and the box that contains the drive itself.

It also has some images on the box cover indicating that this is used for mobile use, built for that purpose.

Just pick up the tab on front and you'll see the drive itself. The material is plastic but built around the drive and meant to protect it too.

The WD My Passport Pro is one of the most "macho" and sleek looking external drives I've ever seen. Aesthetically it's gone overboard with its looks, matte black finish so you can easily grab the drive with one hand. The ventilation below is apt so it won't overheat on you. Once connected to the port, it automatically installs everything on Mac. Drives like these on Windows especially the Passport ones from WD have wizards you need to follow in order to install. For the Macbook Pro with Retina Display, it was only a cinch. In the eve of files or movies that are HD, the 2TB would be really easy to fill up especially if you already have tons of them on your hard drive or other media. Transferring is fast and efficient. It took a couple minutes having the HD copy of the Expendables 3 from my cousin's Mac so I think that says a lot about it. The thing physically has 2 1TB SSD drives inside hence the capacity. It's a cool cheaper alternative rather than getting it internally on the Mac which costs an arm and a leg if you dig the additional 1TB plus its weight.

You'll get the installation manual which basically just shows you to connect it.

If you're asking where the Thunderbolt cable is, it's actually wrapped around the drive through a groove made in the center. The port's end snaps onto a small notch connected on the cable's end that is embedded on the drive. Now there might be some that might fear the life of the drive would be the same as the cable, but I think it's sturdy enough and strong to actually be something to worry about. You'll probably break the drive first if that's what you're worried about.

Since it can be mirrored, you should use your RAID 0 drive to be mirrored by RAID 1 so it automatically saves your files and have an internal second backup if the first one fails. You don't have to pay for cloud services and they'll perform quite well on OS X or OS X Maverick like cold drives. There's a separate WD Drives Utilities App that you can install separately, free of charge from Western Digital's website. That's if you want to change anything on the drive's configuration. but by default you can say it's plug and play. If you also want to know, the drive is pretty quiet and doesn't bother and spinning involved. Of course it's SSD!

Price wise, it's one of the most affordable pieces of hardware to be seen in this category. I think they've made it with that in mind so you won't even have to battle with other manufacturers who have similar functions. You might want to take a look at Digital Walker and their partner stores if you want to check out these drives for your Mac. It's worth it for photographers, movie couch potatoes and just plain file hoarders at this price point. You should get one.