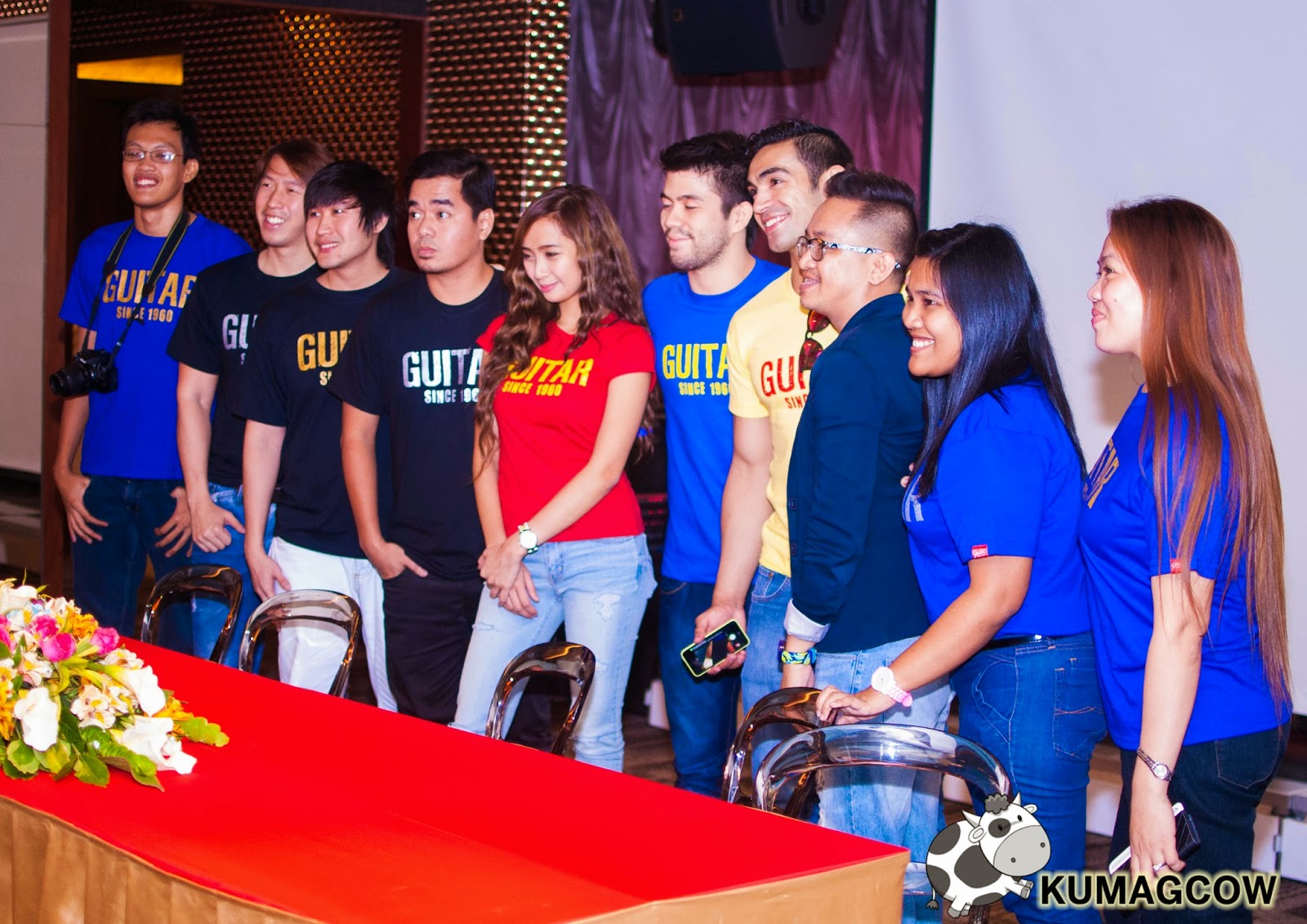 A brand that encompassed generations and rocked the innerwear industry for over 50 years, Guitar Underwear just recently announced their new endorsers and relaunched their existing ones at the Cities Events Place in Sgt. Esguerra, Quezon City. They also showed their brand of inner and outerwear shirts, sandos, modern basic briefs, panties and boxer shorts during the event. The brand which started in Hong Kong, then transferred its operations in the Philippines - now holds to be one of the best brands aiming to by synonymous with intimate style and quality.

Saw these two guys chatting and had to disturb them for a photo op. Carlos Agassi who's sculptured physique just screams the cause that he had to be here. The amir of rap, he's still got a well formed body to carry underwear like a normal shirt anytime of the day. He works hard at it and makes it a point to have regular gym time urges the need to be fit and healthy no matter what age an individual is. He's continuing to inspire the youth to not only look good but have a lifestyle fitness centric. It's one of the reasons why he's been able to stay with Guitar for over 8 years now and they continue to believe in him up until now. Carlos is glad that he's still with the brand and promises to continue staying in shape for the love of the Guitar Underwear brand.

Guitar has been around for almost 50 years but they haven't been able to market themselves that much in the past. They have in the past just invested in regular newspaper ads and thought of re-introducing themselves to the new generation which still comprise the majority of their consumers; hence the event. Quality wise they would never change, but they might actually improve on it. The deal breaker is, they will never even think of raising prices because as they see it, their product sits as one of the most affordable in every shop, mall or stores they are in right now.

I haven't met Ann Mateo before so it was high time we get to know her a little better. When I asked about her background, she says she started singing for fun and started uploading them on the Internet. This venue got her appreciated more by netizens and got her started to do more later on. Sharing her music got her recognized by a lot of people and it landed her modeling stints, hosting jobs and then a program for People's Television Network 4. Guitar believes in up and coming talents hence the reason why they got her. Not only that, she is officially the first female endorser for the brand. She's in fact making history here. I'd like to get to know her better soon. She's happy and thankful though for Guitar to have her as an endorser. She feels that this is a feat she never knew would even happen, the fact that she's endorsing a brand means they believe in her... she feels elated.


When I heard he's going to be here, I turned into a fan. He's one of the few Filipino American Athletes I look up to, especially in the MMA leagues. He grew up Tokyo, lived in Baguio and trained Brazilian Jiu Jitsu. He went to MMA a few years after. He's one tough cookie and his professional career is very impressive. I saw a couple of fights he won overwhelmingly.

Being a very good example to the youth and a world class athlete is just one of the few reasons why Guitar got him as an endorser. They are also gearing to have some of their designs and clothing be adept with the athletic side. They'll still have the classics but make new ones that would cater to the young, the professionals, the athletes and everyone who needs it. Mark now has his own team called Team Buffet and he'll be coming up with a team who'll manage a blog that will basically also discuss lifestyle, health, sports, food and a lot more. It's a big undertaking but Mark's excited about that. Just get updates on his Facebook page "Mark Mugen".

Guitar's Marketing Manager Alvin Ross Uy Rivera says they'll have the classic ones in the market and create a new product line. "We've already started the outerwear shirts, like the ones they are already wearing. They'll also be coming out with new bamboo fabrics, dry fit ones, Polyester shirts, and pretty soon even socks and other ones that would complete their collection to have something from head to toe. It's already second most or the most affordable brand in the market. It's available in almost all department stores and even internationally through SM too."

A man that needs no introduction is rap superstar Gloc9. I've been a fan since I saw him perform live during a Coke event years ago. He's even helping other artists make it to the scene, even better that afternoon because they also played the music video that's perfect for the campaign Guitar is launching. To get a glimpse of that, here it is!


He performed it together with Denise Barbacena. Of course there were some antics in between by Guitar endorsers as well. Since it's Filipino week, that made him even more proud to say he's part of this brand. He didn't have to strip for the most part of it but he's making the language and connection a big part of the influence he's emitting on and off cam. A lot of people believe in him and that's his selling point. For what it's worth, he's pretty happy Guitar believes in his talent and they have an understanding like a gentleman's word to support each others endeavors. That right there is priceless.

Congratulations to Guitar and your new endorsers!