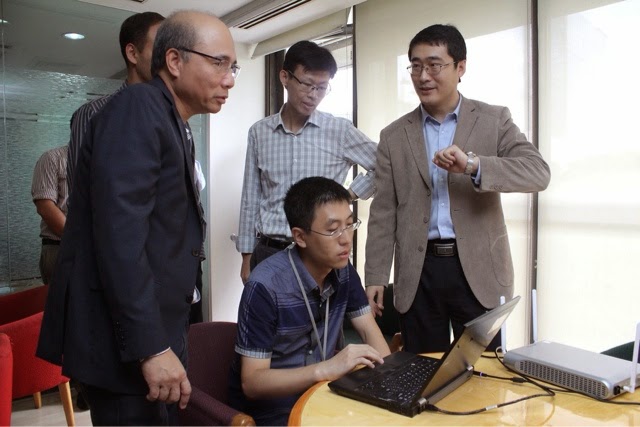 Mr. Orlando B. Vea, Chief Wireless Advisor of Smart during the tests of 5G LTE-A technology in 2013; where they recorded 209.66 mbps speeds in the Philippines.

In the eve of the rising number of Filipinos clamouring for better and faster Internet connection, the nations largest network Smart Communications just announced the first ever use of 5G LTE in the Philippines by switching to this state in  the Smart JUMP Center in Mandaluyong City.

Mobile operators elsewhere in the world like AT&T and T-Mobile has this and it has delivered data of up to 100 megabits per second (mbps) to 1 gigabit per second (Gbps) which is alomst ten times faster than 3G. You can also compare that to be more than twice as fast as current 4G services in the country.

This new LTE-A technology is something historical as this pegs Smart to be in the ranks of a few carriers in the world that has it. Smart just made the Philippines stand along with other leading mobile operators in South Korea, United States, Singapore, Australia and Hong Kong. Now that this is going to be available in the country, we would be soon  enjoying dreamy 5G speeds as they roll out these changes in more regions in the Philippines.

This has been a possible task as Smart also utilizes the PLDT Fiber Optic Cable connection. They say it's already around 90,000 Kilometers of underwater cabling installed and they'll be continuing to install lines in the Visayas and Mindanao region to prevent redundant ones. It's going to be faster and better soon and it'll benefit millions of Filipinos. As long as you're with Smart, you're gonna get there!