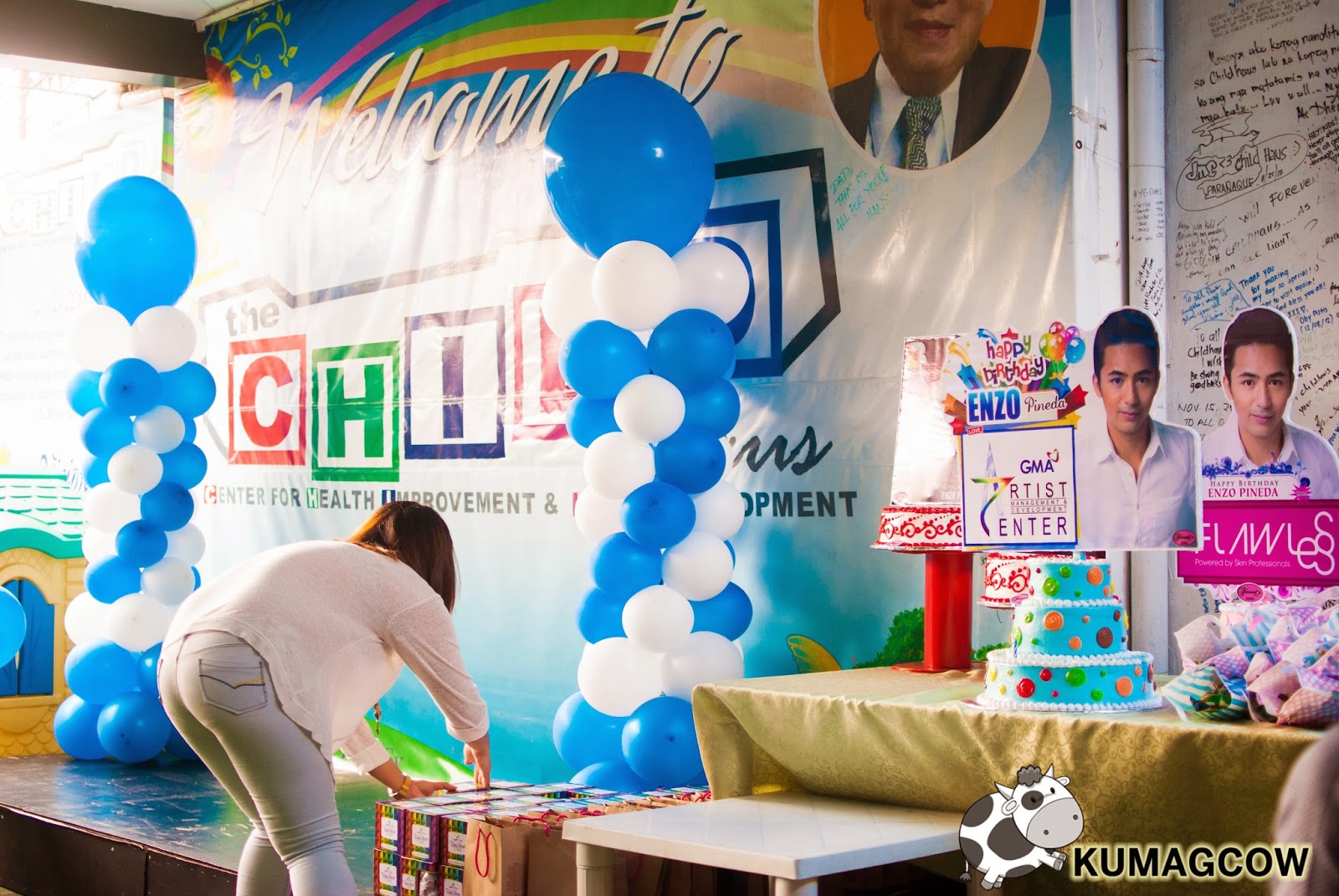 I've never been to Child HAUS but have been hearing about them a long time ago. The first one was last year when they were being evicted at the Quezon Institute grounds and they didn't know what to do with the children staying there. Just so you know, these kids have cancer and other serious diseases and they are getting treatment in Manila hospitals to survive. They have no place to stay here because they live in far flung provinces. It's their only hope. Good thing there are generous businessmen, celebrities and foundations who chipped in together to make this a permanent place to stay in as they offer free room and board for these kids at 90 Mapangakit Street in Quezon City. It's a small place and can only accommodate a few children but it is serving its purpose. It's Enzo Pineda's birthday too so he's thought of helping the kids by celebrating with them on his special day. Instead of Enzo getting gifts, he wants to share his blessings to these young ones who need to be happy even at their state. So GMA Artist Center, Bench, Unisilver Time, Mc Donald's and Enzo's sponsors arranged for a birthday party in the shelter and oh it was memorable!

I was touched by this message posted on the wall of ChildHAUS which talks of how important it is to help and not think of material things. Enzo and his Mom arrived and the kids were all happy to see him for the first time.

Enzo's Mom became a little bit teary eyed as she was invited in front to talk about her son. She's thankful that he grew up a very responsible, fun, loving young man and says he never hesitates to help people too. They did something right in raising him and at this state, he's going to have more success which his parents are so proud of mentioning. She also thanked the people that helped Enzo to be where he is right now, I couldn't believe she's his mom... too young looking no? Aside from that, Enzo's fans the Enzopipz were there to support him. He mentioned they weren't fans anymore because they are his friends now. He thanks them for their support!

The kids surprised Enzo with their own song and dance number. It was touching and Enzo gave them hugs and prizes after that sweet gesture.

He thanked the kids and asked them for a photo op, he says he will remember them and their precious gift for Enzo.

Enzo started to give the kids Happy Meals that's also got Doraemon toys on them which they surely enjoyed for snacks. Thank you to McDonald's for this!

We then sat down with Enzo for a short interview. He never told us that he just ran half a marathon that morning and felt a little tired but he said it was worth it because he got to help the Vilranie Foundation in that run. He also asked his celebrity friends along like Steven Silva to run with him and celebrate his birthday that way. It's a good thing he's into sports like this and he influences a lot of people to live quite a healthy lifestyle. He also did a naughty and nice number during the Sunday All Stars celebration together with compatriots Rocco Nacino and Mark Herras. He's also excited as this prepares him for the upcoming Bench Underwear and Jeans Fashion show slated this September, he also thinks he needs to gain some weight before that. He's also happy that he gets to play with any role as his image runs around sexy for those who are a little older and a kind Kuya (brother) for the kids who look up to him. He's flexible and wants to stay that way and says it's an advantage. He's 24 but looks so young in person (he looks 16!). He appreciates that he looks young so he can get to play roles making him one of the most bankable stars in GMA's stable. He's a regular in SAS, he's done GMA Dance Festival in the Visayas, he's also done Sundalong Kanin which is an entry to the Cinemalaya. He's got so much compliments on that film and it got the Audience choice award. Cinemalaya has critics as audiences and it's a big thing to have that done a good way. Getting shortlisted for an award and experiencing it was enough, the award was really a feat he didn't expect.

He wants to do more roles like that and love to have more materials like that. He auditioned for it and got in, he says it was a very humbling experience and did it to prove his artistic side is ready for anything. He adds "The sky is the limit when it comes to acting and I'd like to do it again." He also says the film that won the best picture during Cinemalaya called "Kasal" was really good and even if he's going to be given gay roles in the future, he sees that as a challenge and quips he can do kissing scenes because actors are trained to do that. That really makes sense. They have exercises in workshops that deal with that no matter what the orientation is. He wishes to be a triathlete in the future and plans to join the Cobra Triathlon next year. Being in a Triathlon means he has to train for that and plans to get involved with it soon, because he wants to also be challenged mentally. He's not afraid to even have accidents because the fulfillment is so worth it. He also appreciates the views while running and takes these out of town trips because he gets to see other places aside from Manila. When asked about his gift to himself, he said he joined an Aquathlon and said that got him to a different high! He wants challenges, that's his gift and doesn't like material things. He wants to do things with higher purpose so that's one of the reasons why he's in ChildHAUS too. He's so happy to see the kids. Next year, he wants to do something big like an "Enzolympics" where his fans would be competitors and train for it.

He's going to the gym more for Bench Body, and sees he's going to do better. He had so much fun with the nun chucks during that shoot. He can't wait to show people what he's got come "The Naked Truth's" night! He invites everyone to go to the show on September 19 for that! Expect more that evening because he's prepared something big for you!

Happy birthday Enzo! :) I can't wait to shoot you in the runway!