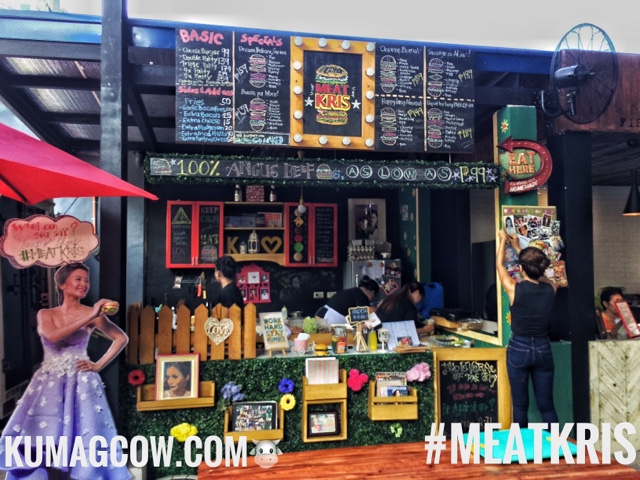 I went here last week and I was surprised to have seen all of the stores closed because I didn't know that they open after lunch. So I failed the first time.

The next week, I was so excited to meet Kris Bernal as she embarks in new territory because she's not going to act this time; as she's putting up a new burger shack called Meat Kris. It's a play on words because the actual shop personifies the young Kapuso actress and if you saw this in real life, those little knick knacks are actually personal items from her and the shows she's done all throughout the years. From the tons of stars she's worked with, to the men she was partnered with in shows like Alden and Aljur, they're all here! 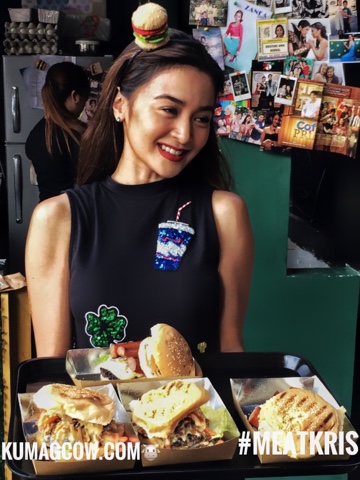 It makes sense that all the things that might have been turning points in her career gets included in this very personal enterprise that Kris is doing. She wished to have had a BIGGER restaurant but she knew she was a neophyte to embark on something that big. She wanted to actually start small and do it how she wants to execute it. She's also got people from her fans (or related to) to actually be hired so she could help them with livelihood, she even feels a little off when they call her Ma'am when they were training. Now that it's all here, it's already selling like hotcakes, I mean burgers, good ones that is. 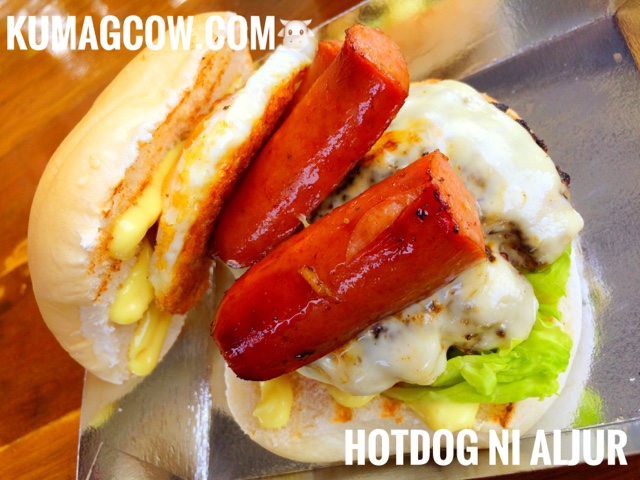 Of course, she's bound to have him on the menu. This is somehow a ride on Aljur Abrenica and his endorsements in the past. She wants him on the menu because that started all the things AlKris, that's the the love team name with the Kapuso hunk. It's got the lovely 100% Pure Beef Patty from MeatKris, plus the special sauce, Beefy Hotdogs, and an easy over fried egg. That's what they call Hotdog ni Aljur. 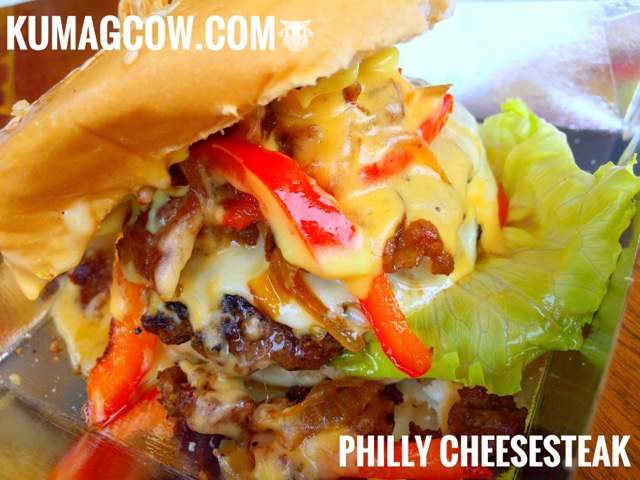 Now this one is her version of the Philly Cheese Steak. It's called "Dapat Ka Bang Philly-in?" patterned by Kris and Aljur's old show "Dapat Ka Bang Mahalin?" (Second Chances) back in 2009. I would recommend you have this while it's hot and DON'T Instagram (although it would be good to brag among your friends) because you won't enjoy it as much if it's cold. My friends agree. It's got beef strips, veggies, chili, and tons of cheese. 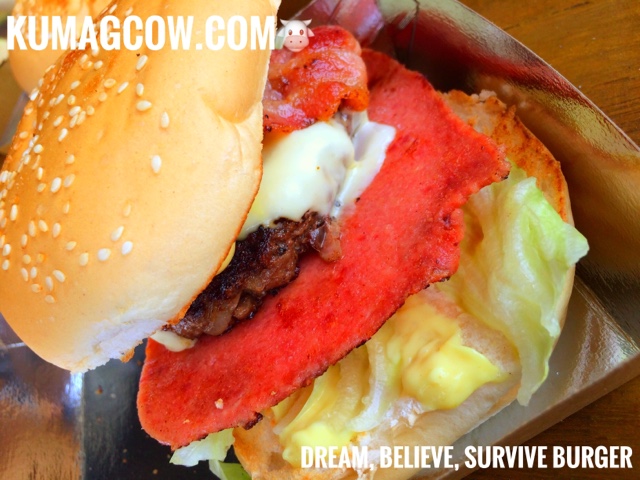 For those who don't know, Kris Bernal actually started in show business when she did Star Struck. The GMA show is still doing it and to pay homage she thought of naming this Dream, Believe, Survive which is the tag line of the show. It's got a quarter pound hand crafted burger patty, bacon strips and ham. All the good things, like the good stars who came from the show! 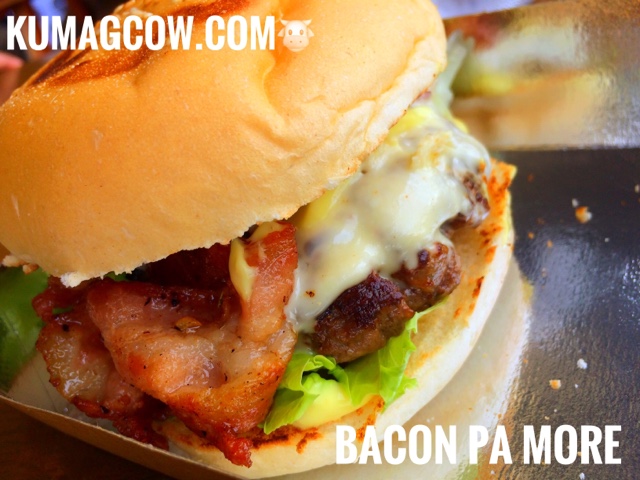 Kris has appeared with a lot of Kapuso stars and one of them is her good friend Alden Richards. She's admittedly also a fan of AlDub and to dedicate a burger for him was just right. This is Bacon Pa More, a lovely combo of the Pure Beef Burger Patty, Cheese, their special sauce, veggies and tons of Crispy Bacon Strips! For bacon lovers, this is a dream. It's not that expensive either and if you're looking for something to battle that fast food bacon burger you've always had, this could really live for that challenge. Then there's more! 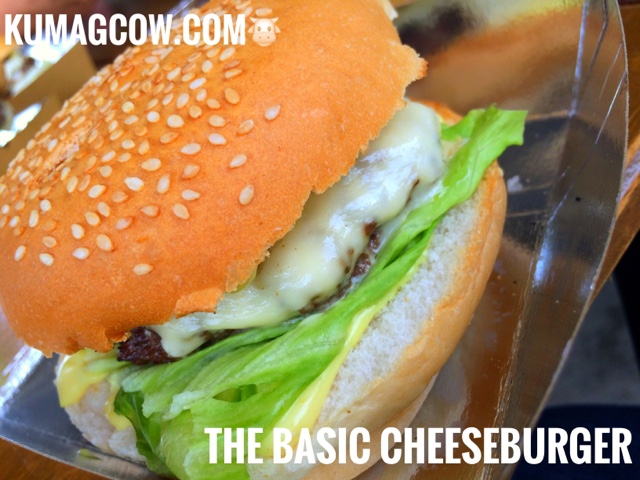 Now you've probably had that quarter pound burger from another fast food restaurant, and this could give that a run for the money. This is their basic Cheeseburger. It's got that Quarter Pound Pure Beef Patty, melted cheese, veggies and a sweet soft white bun. Okay enough about basics, we're going BIG this time! 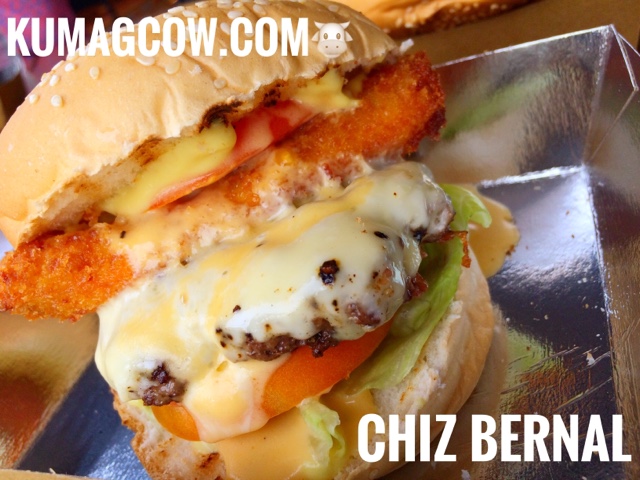 Their current best seller, this is the Chiz Bernal. It's a play on her name obviously and was found as a comment from a fan on her IG post. I think I've seen that when it happened. Anyway, it's like your lovely basic classic cheese burger with a HUGE monstrous piece of Mozzarela Stick in the middle. Now think about what will happen if you have a bite off of that, it'll just burst and melt, and that cheese will just ooze out when it's hot. Not that I'm telling you, but who doesn't love cheese right? I thought so. 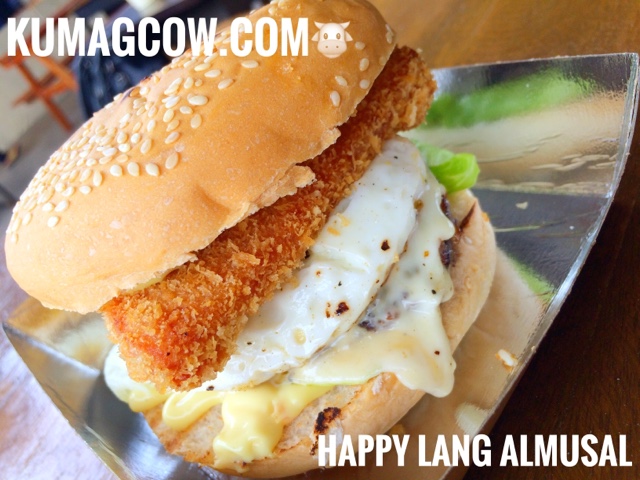 This one is the Happy Lang Almusal which is a breakfast burger named after her famous line as Tinay in the iconic show Little Nanay. It's got everything you love including that spam/meat loaf slice, the easy over egg and cheese. That's how you start the morning even if they open in the late afternoon LOL. 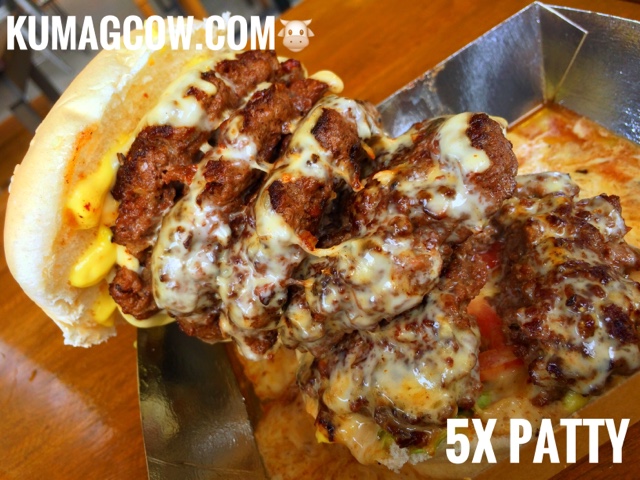 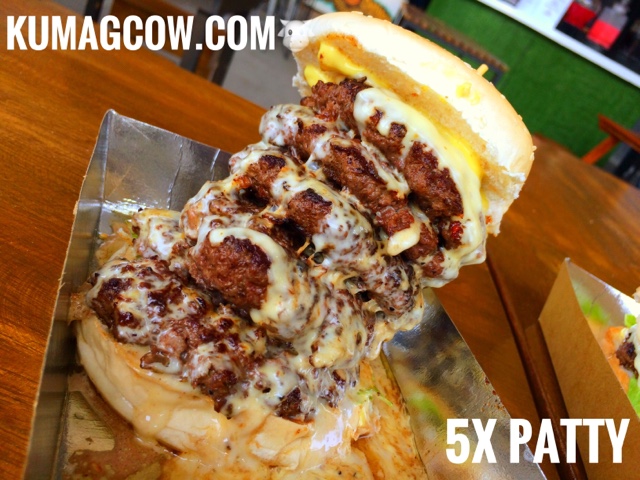 Meet my personal favorite, this is their Meat Kris Cheeseburger with 5x the patty. Their hand crafted pure beef burger patties are about a quarter of a pound. If you think about that, this one is like a pound and a quarter all in all. This monstrosity is actually just right for people like me who want a REAL protein fix. It's for people who love burgers, this isn't really hard to eat because I finished it in a couple of minutes. It's got the usual suspects, cheese, 5 beef patties, tons of cheese and a leaf or two so you won't get guilty without it. Trust me, it's worth a try. Kris says she doesn't put salt on her burgers but this was actually flavorful as she uses a lot of dry herbs in the mix. I think the flavor profile was more on thyme. If I'm going to go back to Meat Kris, I wouldn't hesitate to order one of these again. It's worth it, and it's not expensive as I mentioned earlier. It's not even 300+ ish which I would gladly pay for.

Here's our interview with Kris Bernal this afternoon. Enjoy!

For those who would like to have the same Meat Kris experience that I had this afternoon, you may visit them at the COMMUNEATY at 120 Roces Avenue in Quezon City. If you know the Mc Donald's Branch in Tomas Morato, you can walk from there towards Roces Avenue in like a couple of minutes and you can get there. It's right at the front of the old Dragon Bar, and right before the street of Max's Scout Tuason, you wouldn't miss it. Here's a map so you won't get lost, just find the burger!

If you still get lost, it's not my fault anymore LOL. Love burgers? Then you'll really love Meat Kris!

http://gmanetwork.com/artistcenter
Posted by John Bueno at 1:17 AM