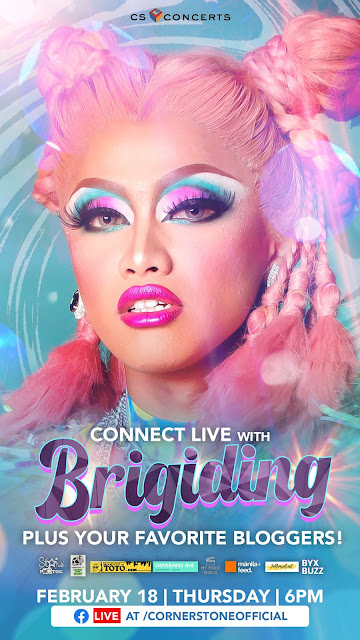 Drag queen BRIGIDING was just introduced to us this evening. The drag queen is part of Cornerstone Entertainment's pool of talents and she's doing a Zoom birthday concert on February. In it she's going to introduce herself and what she's capable with. It's her whole life as a performer, her baby pictures, a personal journey of a drag queen. She says "It'll all be worth it!"

The Zoom birthday party costs only Php 150 which cost a little more than a coffee cup. If you're fond of drag queen performances, and want to just sit at home and enjoy it, it'll be so nice to see her perform and her drag queen friends.

Brigiding started in 2013 and she quit her office job, auditioned in a bar and felt she was in the right place. She's been doing this full time and does makeup and hair, theater, a few commercials, because she has always wanted to be in the spotlight. She has attributed this to her liking of RuPaul and the dragrace series. She says "My family was surprised when I did this because I had to dress up before going to work. Since the beginning, I had ver supportive parents and they didn't stop me to do the things I love."

She adds "My drag name came from my Grandpa Brigido. When I was a baby, I was called Brigiding as a term of endearment by my Dad. It's more of the real me, I see that connection and even if I'm made up, I'm that person... the real authentic person of which I am. I have been called Gigi in the past but I realized this was more apt. My real name is John Philip, it's been a while since I've been called that. I think I want to work with Alex Diaz, and Marco Gumabao, Kokoy, some of the good actors today. I hope I would be able to work with them soon. I want to also work with Ms. Cherrie Pie Picache and Gina Alajar where I could also learn." 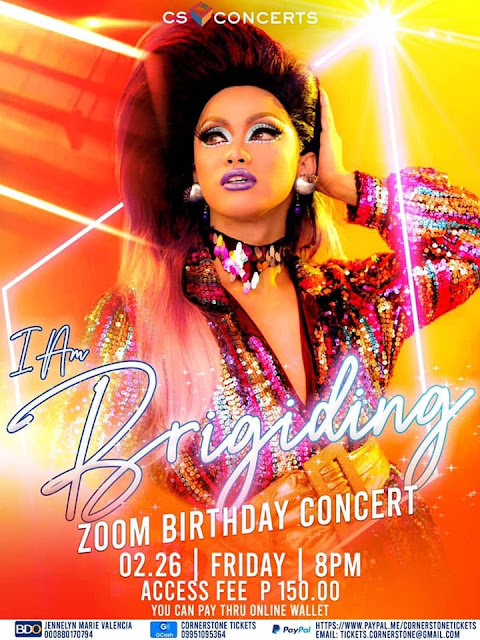 "One of the hardest things being a drag queen is trying to get the attention of the audience. Some are not as receptive, you have to command the stage when you come out. On a deeper level, you need to feel you're not discriminated because until now the Philippines has some stigma against drag queens. I want to be respected doing what I love to do. It's a process and we have come so far, some things have changed and being accepting to drag queens is becoming a norm, I'm happy to see that in clubs and now in mainstream. I admit I see some people belittle the art, because of your performance, but I don't get bothered because I am capable, I love myself more than their opinions. I have also performed when I was a bit sad because of small heartbreaks, might had to fake so the audience to not feel that from you."

"Preparing for a drag performance is easier for me, I have less hair, less tucking needs, it's just the details of the make up that takes a lot of practice. It also takes confidence to carry the hair, the costume before the performance. You have to be in the next level with your character, when you're there, you feel like the most powerful performer in the world. It's difficult, but I do it. My birthday wish is for my drag community. They are not doing well because we don't have means to perform in crowded places. We hope we could have platforms, hopefully have more projects, to have purpose as a drag queen. To hopefully have more opportunities for them too."

"When you get to perform live, the feeling of giving people the entertainment they need, to touch their emotions, it's to make them happy especially now that we are under the pandemic."

Broadway, Musicals, Pop, Rock, the show will be filled with different layers. She's excited for people to see and feel they relate to her too. There will be dancing, singing (lipsync) and more. It's going to be shown from Cornerstone Studios. As for the guests, there will be some Cornerstone artists that will be appearing in the concert (but that's going to be a surprise) and her drag best friends will be there for sure. Tickets are available via online wallets BDO, GCash, PayPal or email them via tickets.cornerstone@gmail.com.  This is under Cornerstone Concerts.

It's the best sub rather than going out in the clubs! Stay home, be safe and enjoy the show!