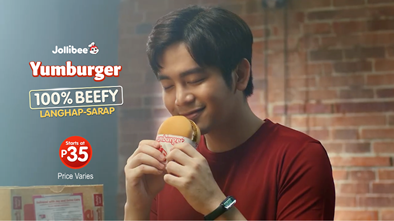 Joshua Garcia is the talk of the town today. The trending video he did with Julia Barretto just gave us so many memories of their past relationship, so much that all the things they said on that Moira music video, felt so real... as if it came from the words they weren't able to tell each other before they broke up (if that did happen). Anyway, Joshua doesn't just do drama these days, he's actually working out and if you haven't noticed, he's getting a bit bigger than what he looked like a couple months ago. It's a good regimen which might land him in future roles as he's extremely capable of doing so.

Just recently, he also starred in a Jollibee commercial which featured his favorite treat right after a workout, the Jollibee Yumburger. It's cheap, and is what he craves for during this pandemic. It's made with 100% real beef so you can smell that "langhap sarap" thing they've actually been famous for. Best of all, it only costs Php 35 for the solo and Php 49 if you get the Cheesy Yumburger instead. You can order it through the app, their website or #87000 which is their hotline. They are also available in Grab and Foodpanda so whatever floats your boat, they're there!