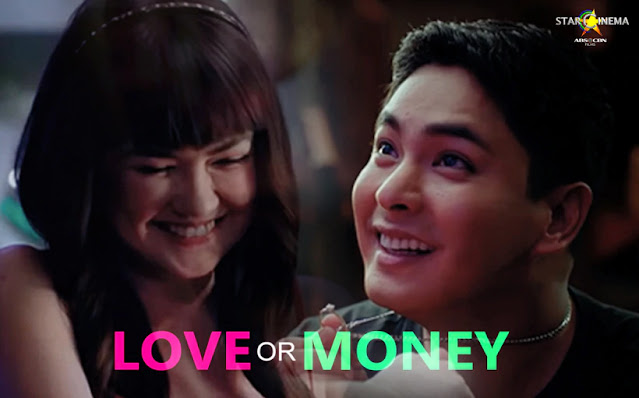 Love or Money, which will you choose? Well that's a hard question to answer but this new film from Star Cinema is just going to answer that for you. Angelica Panganiban and Coco Martin is teaming up in this project and with their first on screen pairing, it's going to be very exciting!

The Love or Money Blogcon or BLOVECON was a pretty fun way to actually get to know who their characters are and if you haven't bought tickets at KTX.PH, this might actually convince you to do so.

Direk Mae Cruz Alviar says "My artists were not flying to locations and we were blind doing the scenes. I was already ready but people were already sent home because of safety protocols. We were supposed to extend but Coco had Probinsyano and cut the trip short, it was a blessing because after that, we had the lockdown. Announcements were done while we were at the beach finishing some scenes. We forgot the film and saved ourselves while editing in between takes, and online, then waited for things to become normal. This was really a pandemic baby, it had so many challenges. We went through a lot and survived through that. Coco also had a limit in English, we joke about that. He asked me to direct him because he was Cardo for several years. He wanted to be corrected. He listens and he wants to know that, as he wants to be different in this movie. He is very patient, he knows how to fake punches and he knows the tricks, he suggests stuff, he does action 101. I learned a lot from him and he was so kind."

Angelica Panganiban says "When we were in Dubai, we were all going to run fast to the airport because lockdowns were already happening. We were pressured to finish this but didn't know if everything would close down. We were also worried about the shoot in the Philippines and if the movie is going to show in the country. Pandemic, the whole COVID thing was just crazy. If love or money, I would still choose love. If you work hard, you could still get that money, but love is a little harder to get and you pray for that. I couldn't find any fault on choosing money though, because if that gives them happiness, if that provides for them and their family, you can do without love, because that's the truth. You can find love later, or if not, you still will be happy. You can be lucky to have both. It's a big responsibility to give opinions, you have to know yourself, what your rights are, we are just lucky as artists, but they too can contradict you, and also give their opinions, that too is their right. Coco is tahimik, mahiyain, it was hard to actually pull off our team up because he has his own world. I was crazy, and I think he somehow doesn't get that. I was expecting him to give me a bike, a vespa, but he didn't, I was asking him to buy me jewelry, but he didn't. My room was actually full of food, it was like a grocery, I added a lot of pounds and ate a lot while we were there. Also, I wouldn't mind if I were supposed to be stuck there because it felt good to be there, I like that country."


This was a super fun interview because Angel was just hilarious! But she'll be showing sides of love, hope, and romance too. Watch her journey as she chooses love of money in this movie. This almost didn't happen because of the lockdown, but they were able to finish it so you could get something to watch. It's light romance with some of the best actors ABSCBN could churn out, Star Cinema made it, so I think that's enough.

They do good movies.