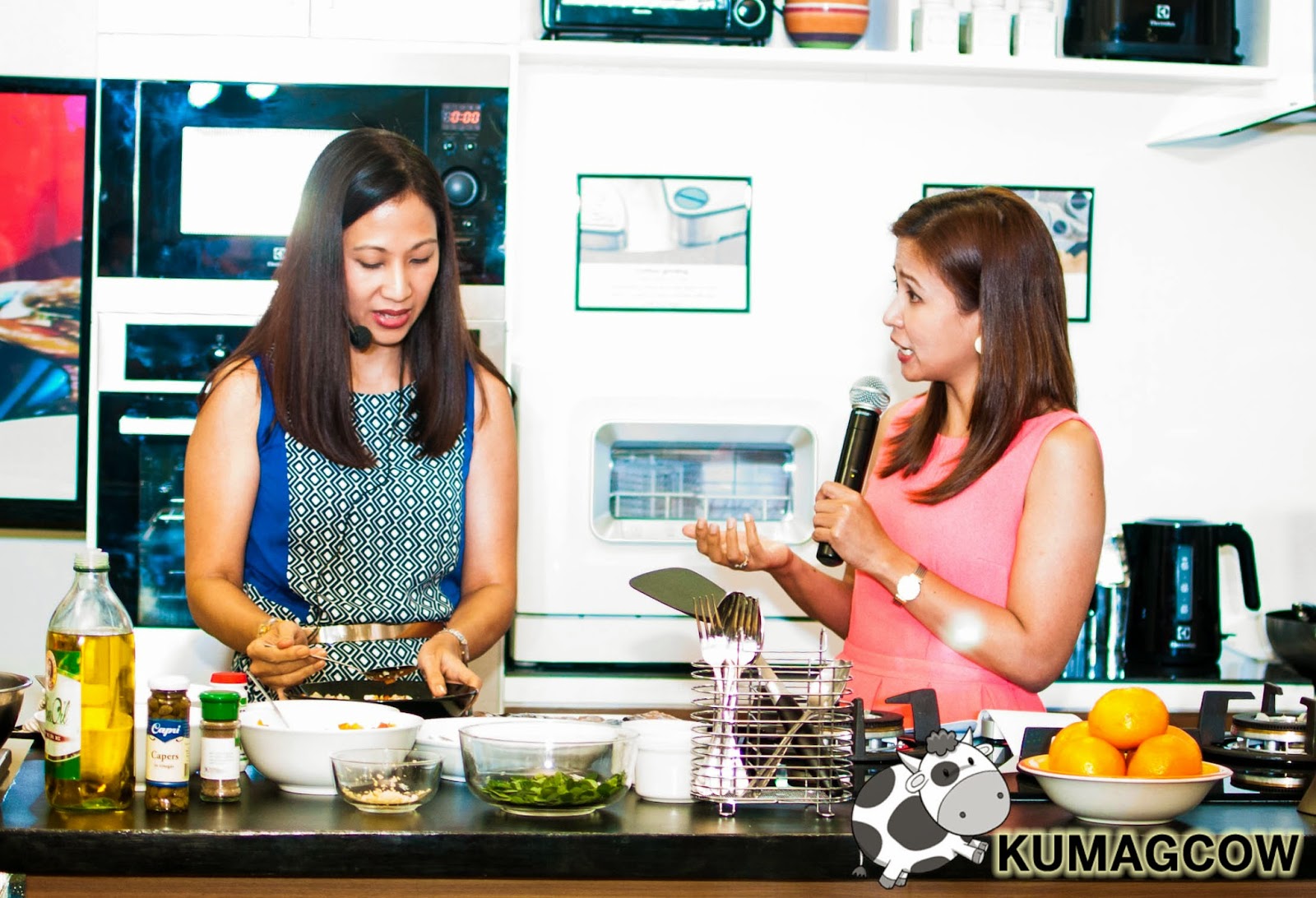 I arrived a little late at the new Electrolux office in Bonifacio Global City a couple of days ago. Although from afar, I heard a familiar voice from one of my favorite DJ's on Philippine radio Delamar Arias - one of the hosts of my most favorite radio show in the entire world The Morning Rush on RX93.1. I've been wishing to see these guys for a long time but I haven't seen them together since the Bactidol campaign. Today, Delle was here to host a very special day for Electrolux and yes they have moved into a very nice and upscale office in the Fort. It was really nice for them to invite us over and take a look at their newest products including their endorsers too.

Ms. Janice Villanueva and Delle were preparing something on the kitchen when we got there. This is their open faced fish panini. I guess it's about the same process in cooking but it was made easier by making it with just a few steps. Mixing the onions, tomatoes, spices and other ingredients, lay them on top of the fish, put them on top of the panini and bake until brown. I think I've gotten the hang of this because I do cook. I think their dish was special though because they got to use the Electrolux oven and made it in minutes! Voila!

It's even healthier and really tasty, made with love by Ms. Janice Villanueva. It passed the standards of Delle, so that says a lot. It was during this time that I also saw Delle's cute as a button son Cooper who was sitting on the side. It was like a short family gathering really. This new Elextrolux office looked so homey despite of its urban flair.

Then I saw my favorite Chef in the world Chef Bruce Lim (Nigella Lawson comes a close second for obvious reasons LOL). I still distinctly remember meeting this guy for the first time during an Electrolux event last year and I've seen him a couple of times since. I've learned a lot and still enjoy to catch his show on the Asian Food Channel every now and then. It's so great that he's one of the personalities endorsing for the brand because he's got it all.

He also showed us around the kitchen and told us about this great refrigerator here. The thing is, he showed his romantic side hehe. He usually writes notes on the fridge door directly and says how he goes about using it everyday. A proud father, it's also the place where he posts his sons drawings. If it can make the wear and tear of kids and his busy cooking, I don't think anyone will have problems working with Electrolux appliances in your homes. He made us a fast and easy pasta dish using Pene, mushroom and cream. Ahhh.. I had seconds of course! Thanks Chef for a wonderful meal!

When a short raffle was held, they dropped the bowl and did the greatest thing that evening. They gave us each a brand new Microwave Oven! Woot! Thank you so much to the executives of Electrolux and CONGRATULATIONS on your new home at the Bonifacio Global City! Can't wait to see more of your events there as you launch new products in the coming years!

PS. I love your No Noise Blender. When can we see that in action soon? :)