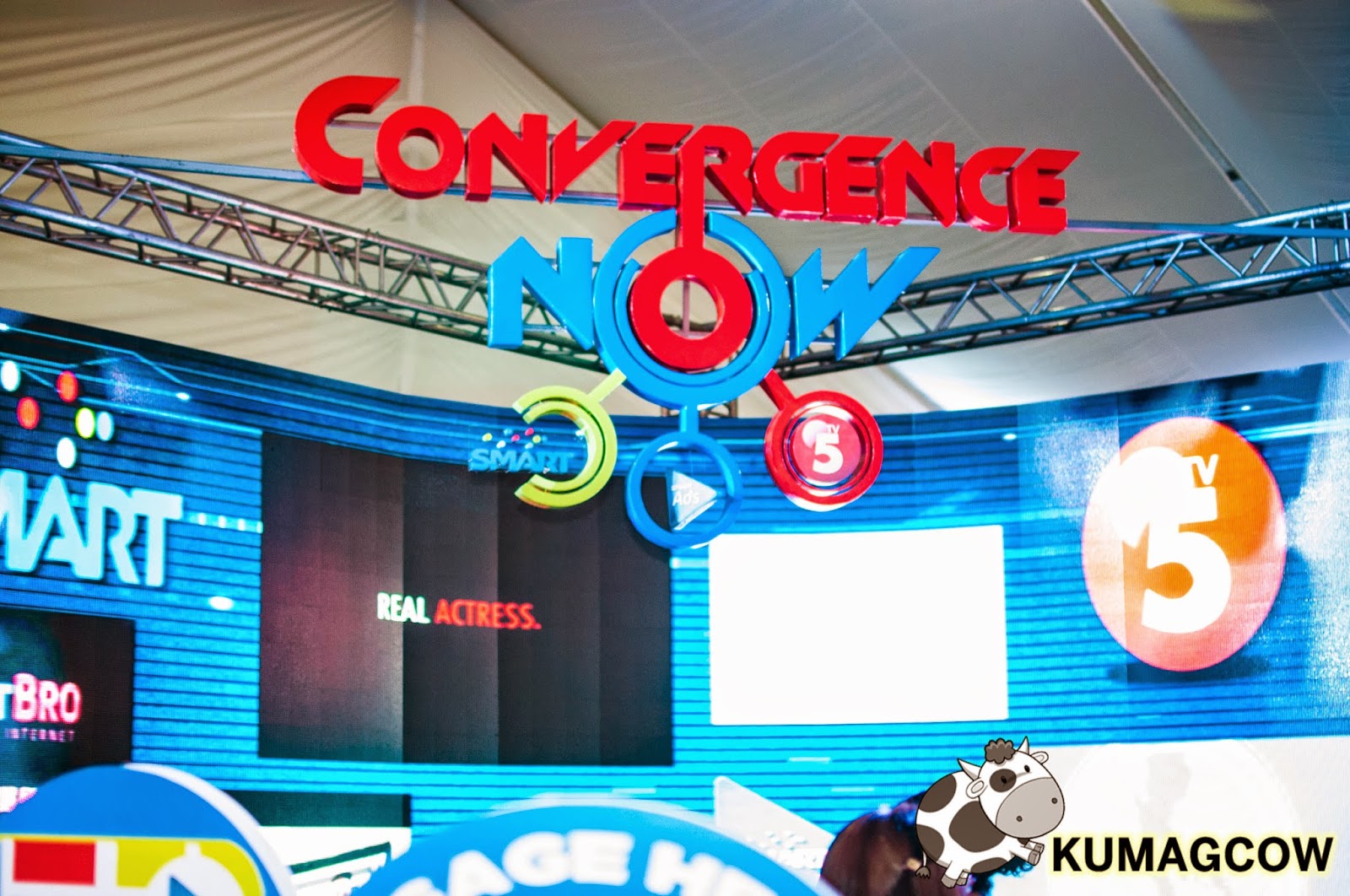 It's my first time going to the Ad Summit. I have been hearing about this from Advertising people and they only have good words. I wasn't expecting much but given that I'll be seeing new people from the broadcasting and advertising industry, I knew this would be something for the books. TV5 has been steadfastly producing great shows recently and with that, a multitude of services included in their portfolio. Their theme for this year is Convergence. It connotes being affectionate, closeness, intimacy, fellowship,friendship, being inseparable and or warm fellowship. They introduced this to the market so sponsors can take advantage of having maximum visibility. With the powers of Smart, Smart Ads and TV5, you'll see something bigger and cover a wide range of audience in this competitive market.

TV5 has asserted it's position in making quality programs and cover even the best sports organizations in the country. With TV greats such as the PBA, the Gilas Pilipinas games, Celebrity Dance Battle, Beki Boxer, WOW Mali, Astig, Confessions of a Torpe, One of the Boys and other shows making a mark on Philippine TV ratings, they have produced original stories, concepts and even their new stars in house. Endorsers come from the same station, they take the high ground and prove worthy of products they believe in - converting to really believable people that the public agrees with. Just look at Jasmine Curtis and how the fans purchase the products she's been with and you'll understand the others.

TV5 also hosted the dinner on the first day of the Ad Summit last May 8. It was attended by 2,500 delegates from different entities in the Philippines. So just imagine how big the crowd was in the Subic Bay Exhibition and Convention Center. Then MVP arrived.

Manny V. Pangilinan delivered a very funny speech. I've never seen him in a public forum like this but the first salvo was enough to tell me that he's got humor. He opened up with this statement...

"The last time I spoke to the advertising community was a little over two years ago in 2011. I said then that ABS and GMA were quarreling over who's number 1. TV5 was clearly the undisputed number 3 in the industry. Today, I can confirm that we are still number 3."

I almost choked on my wine glass after hearing that. I thought he was just going to be serious and tell us about numbers which usually happens when executives are on the podium, but he did this differently that everybody loved it!

The he got serious about telling us his plans on Convergence.

"At PLDT and TV5, we like to talk about the 360 degree media experience and our multi screen platforms: Television, Computers, Mobile Phones and Cinema. It is a scary word but if you reflect on it, there are some useful insights. First, where trends point to declining TV viewing, one would assume content consumption is decreasing - the truth is, that it's actually increasing - but on digital and multi screen. Second, viewer habits are changing as content is devoured whenever and wherever, at the viewer's convenience. The question must be, how can advertisers and telcos address this emerging demand? We all know we must be where the consumers are, or where they are going. Finally, content must be made relevant to the digital natives - millenials, the gen-Y Filipinos would be one third of our population and the same people will access digital content formatted to multi screen, multi platforms and on the go data. This is exactly what convergence means, telcos going digital and content following suit - all to serve growing consumer needs."

Manny Pangilinan clearly thinks out of the box and addressing the marketing needs of companies and reaching the target audience needs a totally different approach via these digital channels. The importance of social media, resources that only telcos provide is something that their group of companies can only manage. If they have the infrastructure and the portfolio altogether in one package, then it is the better choice to put your product and trust in.

Speaking of TV5, we were treated to a great entertainment showcase by the talents of the TV station. They've actually been hiding these three powerful ladies and mind you, they are trump cards. Meet Isabelle De Leon, Lara Maigue and Katrina Velarde.. The Trenderas...

I was blown away by one of these girls when they sang Love on Top, you better find out when they'll come out on a series. Advertisers are probably itching to get their hands on these three because as far as I know, they got a standing ovation. No joke.

Aside from that, a man from Republic Biscuit Corporation won One Million Pesos courtesy of TV5. It'll surely change his life forever!

Then we all partied with TV5 stars on center stage, that was really something special!

Edgar Allan Guzman and Martin Escudero were so gracious and approached us on our table.

We also spotted singer-composer extraordinaire Ogie Alcasid, comedian Bayani Agbayani and who's that sexy gal with him? Whoa! that's Chanel of Artista Academy! :)

A little shocked to see me is Alwyn Uytingco of Beki Boxer and beautiful Jasmine Curtis TV5's lead stars on series.

Chanel and the birthday girl Malak partied hard that evening. Love these gals!

We also saw statuesque Sophie Albert and hunky Benjo Leoncio having fun on the dance floor. Really nice to see you again guys!

In different parts of the room, I also found Marvelous, Albie Casino and cutie torpe boy Mark Neumann. Happy to see this guy doing a lot of projects now. I knew it! LOL

Flanked by bellisima Malak and Chanel is hearthrob Akihiro Blanco.

Saw them on the dressing room again, the Trenderas. Watch out for their upcoming show on TV5!

Daniel Marsh, Eula Caballero and Benjo Leoncio will be stars on the new series called One of the Boys. She'll be seen in this program as a tough gut wrenching driver but of course gets to be the apple of the eye of these two hunks in the story. Promising seems to be a common word with these three and I hope their project would run for a long time. Benjo seems to have been reaping the fruits of his labor beginning at the Artista Academy search. Daniel Marsh is also doing good on the next phase of his career as he did quite nice in the Juan Direction thingy he did with some of his Filipino-Foreign compatriots as they live the lives of ordinary pinoys.

It was an epic party! We all had so much fun!

We had music spun by DJ Callum David. He was great!

Derek Ramsay also did a good job hosting the event. I even heard women screaming as he went inside the venue. It was that crazy! It was that fun to party with TV5. Now that's how they presented themselves to advertisers that evening, they must now see the value of what Convergence presents. In closing, MVP left a very strong statement about going this path:

"Let me close by saying that the inevitable move towards digital space should not be regarded as a threat, but an opportunity for our industry. Ultimately, the online audience will be larger than the traditional one, with consumers being targeted with precision and ad strategies being crafted accordingly."

Just like blogging, we need not to be treated as threats in the old media industry. We are here to help and MVP sees value in that. Thanks for the opportunity to cover you in Subic TV5! and for having us in the Ad Summit! :) For more photos of the event, see the Ad Summit Photos here.