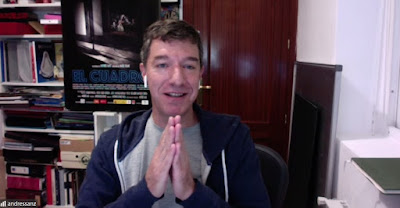 Just got out of the press conference hosted by Instituto Cervantes, European Union as they are celebrating Cine Europa 24. Cine Europa has been done almost every year for over 20 years, I remember visiting the Shangrila mall in Mandaluyong to see the fillms, but since we are under the pandemic, they released 17 heavily awarded films on the Cine Europa website so you could enjoy them all for FREE at the comforts of your home. The presser was moderated by the Director of Instituto Cervantes in Manila Javier Galvan.

Rafael Bustamante of the EU delegation says "I am amazed by this wonderful movie and we have a lot to learn from film makers. The intrigues, are all interesting. We are happy to make this part of the festival."

The Film's Director and writer Andres Sanz says "I never really thought I was going to make movies by art, it's something that just happened. I am interested in fiction, in narrative, and fate happened, this is my first love which is painting. I wanted to be a painter myself when I was growing up, it was not trying to connect, it just happened organically, and I thought it was a good commercial idea, but making this, it's difficult, took a long time and support wasn't easy. To get the funding, it's severely difficult. I see I have about 60 hours worth of interviews and cut a lot to make this film. It's just a single picture but is seen in different ways. It has a lot of narratives, it started in a conversation with an art expert one day and this happened. I didn't even know them back then (in Ateneo in Madrid), Las Meninas was just a fascinating subject. I talked to the producer Antonio and research, investigation started. I wrote the script, I needed a structure. It's so huge and I might get lost so I  needed a guide to know what to put into the film. I already knew how we were going to tell the story. I had to create it to tell the story with suspense like a crime movie. It's like Hitchcock, so viewers would be interested. The project took 6 years, we never knew when it was going to end, it's a long process and when you're done, it was a big relief. I went to the Prado museum when I was a little kid. Before it was in a room, but now it's in the main gallery. I remember entering that room that's crowded, it was like a theater in a way. It was like seeing a movie, everyone was looking at it. There was a guy with a mirror and he was explaining it, I got obsessed, asked my parents to buy me a guide for it. In it, they explained when you see it in the mirror, you see a 3D effect. I didn't see it when I went there as a child. It was like a magician trick, and in 2013, they did an exhibit by Velasquez. There were a lot of portraits and stories and about the people in it. I looked it up in the library, I found one but they didn't have a copy. I found the author, we met at the Ateneo in Madrid and that's when we started planning a movie about Las Meninas. There's something personal, it was attached to my life, my love for Velasquez and Prado but we had to be respectful on how we could talk about it."

He adds "Everybody would like art. I don't think it has to do with any particular country, this story has intrigue, I'm interested in Asian art myself and I know they would be interested in Western ones, culturally we are different and this represents us in that certain time. I think it's a story that has the suspense and surprises of a thriller. It's an interesting mix, not using narrator, but just listening and talking to them. Finding out what the meaning of the painting is for them, someone in the Philippines would be surprised how much intrigue there is about it. It's like dreams, real people talk about it would have different views, elements that are universal. I had a long list of people to talk to, but I read books before making the film, so I had a select people in mind already prior to making it. Jonathan Brown, Fernando Maria, such a great number of people, it was difficult because they probably didn't know me and I had to contact them. I was just lucky at the end because I got who I wanted. It wasn't a propaganda material, I want to give them time so they can establish their point of view. I had to give them amount of time to see what I needed, but their moments are special, even if they had 2 minutes. We shot for hours, lots of them are not in the movie. We talked about the restoration too, but it was very controversial. At the end, the editing should tell the story, you get surprised as it brought a lot of philosophical ideas, it brings so much beauty. I'm grateful for everyone, to meet them, to see them share their thoughts about the film. In the beginning, I created a visual script, it's images that had to do with the film. It's paintings, images, I thought of it while making this film we will make. It's all in black and white, some locations, some inspirational films, at one point I thought of using some of its views so I could do it in the film. I got to the box and got the idea of the box with dolls and puppets, so I could explain Las Meninas. I could also explain them in locations that were not there anymore. I thought about doing it with actors, but it was really expensive, the puppets will give you an idea but not distract you from costumes and feel that it's fake. The puppets somehow had to induce imagination, it's a way to make us think of what would happen. It worked out very well and do it for stop motion. It was all one take and animated it, then we moved to the next one. We had to go, and at the end of the film, we had the puppets, and it meant we are part of that, we become fiction, we become the story. When they talk about this film, they will invent ideas how we made it, it has subjectivity and fantasy. We tried to put that into motion."

It was just awesome to see and hear it from the person who created the film itself, I was at awe of how he was able to put these together. Art is subjective, and I've seen a lot of videos made just for this particular artwork, this one puts you in the driver seat, make you feel you are investigating about it. That element makes it greater, and I'd like to ask you to watch it by registering at https://www.cineeuropaph.com/ and it's all there!

You can watch it all for FREE!