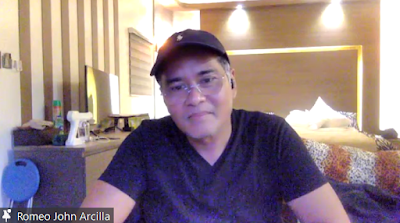 Looks like OTJ (On The Job) is still reaping awards and recently, they just announced that they are now going to be streamed on HBO GO starting September 12.

John Arcilla who played Sisoy in the series was there during the presscon and he says "When it comes to popularity, salability, it's a little hard for Filipino films to have that formula to get the interest of other nationalities and even local viewers to like it. Some think it's a little cerebral, but no, it's actually easy to understand. Now we have platforms that are presenting it like HBO GO. Since I was young every time I step on stage, I think about it like it's for the Filipino people. That's my perception, to liberate people from hangups they have. I don't consciously choose, it just comes but one of the best films I did is like Heneral Luna, it's historical and entertaining at the same time. It's what I want because it's what connects to people. Kids and professors approach me and tell me how they appreciate it. When they call me Heneral, that means a lot because they knew the character. The same with OTJ, with his gray areas, now he's a good guy. For now I want to be a global actor, I want to be seen on the world stage, we have proven a lot of times that we can do the roles as early as Rizal's time. We showcase what Filipinos can do, and it is significant. Whether in New York or different cities, I want to hit that niche so I can do projects globally. I have a few lined up, I have film projects that will happen soon but is preempted because of the pandemic. I can't wait to do that. Filipino films have been traveling around the globe, I've done representations of the Philippines and Southeast Asia since 1986. We've done the most famous film festivals, it's not new to them and we are in main competition. HBO GO has a wide reach, we are ready for the global audience. Our film makers are really good because these companies are not taking chances if there's no quality seen in it. It's just a proof that we are already there. I am so honored to be part of that."

Sisoy and his idealisms saved him. This time, he's going to be seen in HBO GO will also reach a huge audience, to hopefully learn from his life and the others that may touch on social injustice. We got to ask him a few questions during the media conference, so please enjoy!

You can download the app on the App Store and Google Play in the Philippines, the same goes if it is available in your region elsewhere in the world.