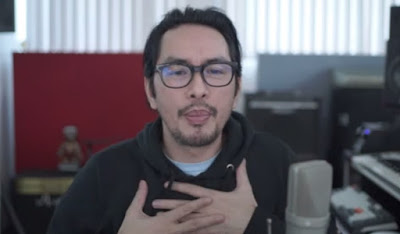 Looks like Pinoy Big Brother is going to be extra entertaining as music will be good with Rico Blanco's "Pinoy Tayo!". Some of PBB's very own alumnus performed it with him during the KUMU Season 10 launch a few days ago. Maymay Entrata, Kim Chiu, Edward Barber, Robi Domingo, Maris Racal, and a whole lot more enjoyed the song on stage and its new flavor. Slower, more melodic, a new version, pretty good to see it that way. It's going to be part of Jonathan Manalo's new album compilation for his 20th year.

Rico Blanco says "I was really excited when I was asked to be with Jonathan's anniversary project. He's very prolific, I supported him right there, I studied it because it was a very revered composition. I had to make it sound like me when I'm performing it. Being a part of that story, I'm excited about the happiness it gives, I wanted that part to be the same and how people react to it. I remember hearing it during a football match and everyone danced to it. It made memories, and we as artists would like to make it that effective. I was already game when we started, I paused when he told me the song, what it stands for, it's well loved and I had to check what I could give to it, it's an honor for me. It just fell into place."

Jonathan Manalo adds "It's nice to see this song uplift spirits. When we made this song and we were planning to promote this song, it was meant to inspire us. Our morale was down, our energies too, and we needed a newer version. It's our way to lightening up the mood, to give hope, to celebrate even if we are under the pandemic. We hoped it could give good vibes, more reasons to celebrate being a Filipino. I took my chances when I talked to Rico, when we were talking I was already thinking about this anniversary project. I always had him in the lineup and was really timing when I would ask him. He was part of that dream. We were moving in different paces, his music was different than mine. I was pop and he was rock, so in a phonecall I asked him about it. We always were together in other activities but never worked together. It was the perfect time to ask him."

Here's part of the presscon on video

The album will be part of several singles that will come out digitally. They will be doing it in 25 tracks, 25 different artists and will be completed by next year. Congrats PBB and Sir Jonathan Manalo!